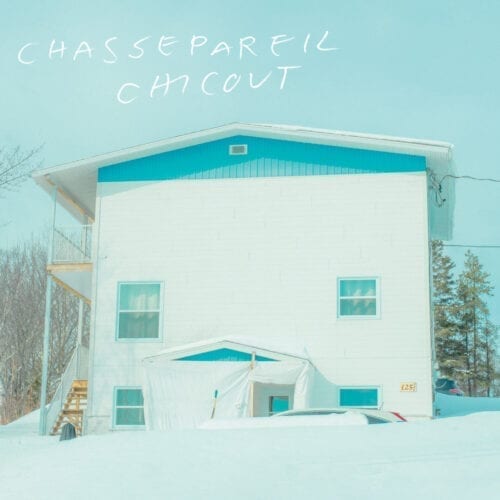 This is the story of a quintet from Chicoutimi, Quebec, called Sweet Grass because of their desire to sing in English and who, after a couple of years, renamed themselves Chassepareil. They went from the fragrant hierochloe – also known as “sweetgrass”, among other things – to the spikenard chassepareille, a cousin of invigorating ginseng. In October 2016, Chassepareil released Les oiseaux d’hiver, the first very successful chamber folk-trad album, with a name more in tune with its language and territory of origin.

Now a quartet, Chassepareil has just launched Chicout, whose 10 pieces are a four-part tribute to the former city, now a borough of Saguenay, to the vastness of the Laurentian Plateau, to Montreal and to the St. Lawrence River. Johannie Tremblay wrote and composed everything, in addition to singing and playing the flute, recorder, harmonica, and organ. Pierre-Antoine Tanguay (double bass and vocals), Pascal Gagnon-Gilbert (drums and other percussion) and Alexandrine Rodrigue (guitars, glockenspiel and vocals) are the other three columns of Chassepareil’s keb dolmen .

Listening to these songs, one catches the scent of British bogs more than that of tourtières or other North American stews, with the exception of “Loups”, with its stimulating folk-rock a la Neil Young, Harvest Moon period. In short, the folk balance is more on the side of venerable ensembles such as Pentangle and Fairport Convention than Scoundrels or The Microphones. Some pieces are enhanced with clarinet and pedal-steel ornaments, as well as synthetic keys by Guillaume Guilbault (Constance, Mélanie Venditti, KROY), producer of Chicout. Johannie Tremblay’s contemporary sentimental poetry is potent enough to move the music lover, already reassured by the music, in a dignified way.