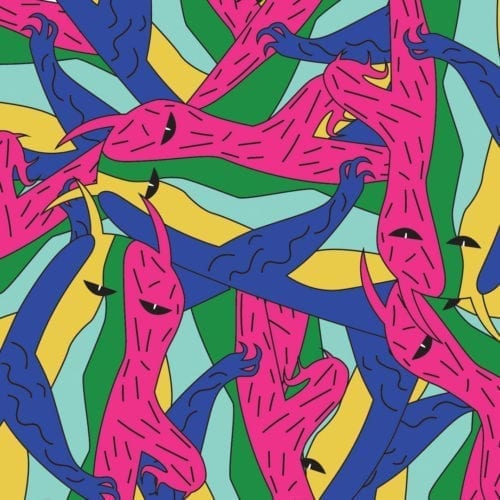 Chimes in the distance, a short drum roll, then “Le cri de la bête” resounds with brass bursts like in those old-time adventure movies, when some great threat arose. Then “L’Homme vide” recites his lament, transforming two thirds of the way through into a town crier spitting self-denigration. “Ébouriffée” is addressed to a grandmother consumed by dementia, while on “Sous les néons”, the death of a loved one occurs too soon. A carnal supplication entitled “Petite folle” follows and the EP ends, already, with “Jusqu’à ce qu’elle danse”, a harsh statement of malaise.

These six songs are the work of the Doyon siblings, Jérémie, called “Éli”, takes care of the lyrics, and teams up with his sister Madeleine for the music. Éli sings, plays the banjo and wields the clarinet. Madeleine sings and manages the tenor trombone – her mastery of the instrument earned her an place in the Oktopus octet and in the Laval and Gatineau symphony orchestras. Matthieu Bourget (bass trombone and double bass), Simon Bourget (horn and tuben), Mathieu Archambault (percussion) and Olivier Amyot-Ladouceur (double bass) complete this sextet.

L’aube, a convincing first EP also six tracks in length, was released in 2018. In the meantime, Éli Doyon and la Tempête have refined their brass-based mode of expression. Balkan influences remain, and blend with local folk and trad components. A few dramatic accents à la Bernard Hermann (from the dazzling soundtrack to Journey to the Center of the Earth, on “L’homme vide”) are added. All things considered, Éli Doyon has Philippe B’s tonality and vocal inflections, as well as the ability to produce admirable Quebecois songs.