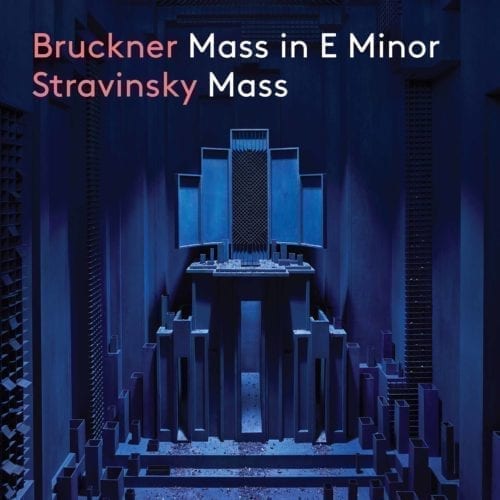 The Rundfunkchor Berlin’s latest album presents two liturgical works, whose musical treatments are very different. Indeed, if the genre of the mass has been exploited since the Middle Ages, it has not ceased to be revisited by composers until today. On this recording we find a mass by Anton Bruckner composed in 1866, as well as another by Stravinsky, completed between 1944 and 1948. Both are made up of the traditional movements of the ordinary mass – kyrie, gloria, credo, sanctus and agnus dei, with the addition of a benedictus by Bruckner. The two works allow us to appreciate two distinct types of writing. Bruckner’s mass for mixed choir of eight voices and wind instruments is written in a post-romantic style, while Stravinsky’s work for mixed choir and two wind quintets is in a much more modern style, featuring one of the composer’s favourite parameters: rhythm. This last mass destabilizes the basic idea of this musical genre, its more austere moments alternating with the colourful interventions of the wind instruments, whose use of the high register prevents a sinking into monotony. Bruckner, for his part, once again demonstrates his ability to make the brass instruments shine. The strength of this album undoubtedly lies in breaking the stereotypes surrounding the mass genre, while presenting two lesser-known works by renowned composers.