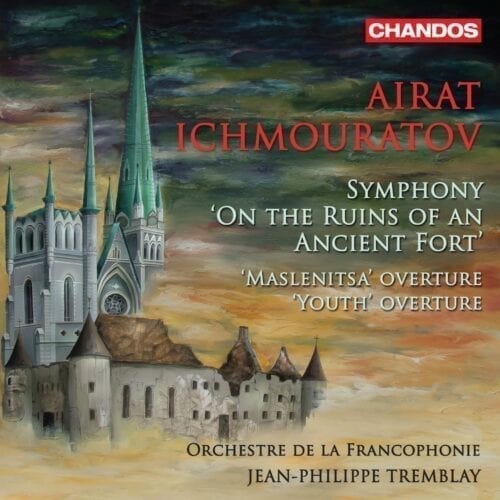 Composer Airat Ichmouratov, also clarinetist with the Montreal ensemble Kleztory, wrote his Opus 50, Ouverture « pour la jeunesse », in 2016. It was to mark the 15th anniversary of the Orchestre de la francophonie, of which he was an early member, along with his wife, violist Elvira Misbakhova. It’s this piece, greeted by a standing ovation when the orchestra performed it at the time at Domaine Forget, that opens the album. Although the composer is alive and well, his music is not “contemporary” in the usual sense of the word. The melody has its place and the compositions are very accessible. Ichmuratov, who spent his first quarter-century in Russia, has retained a marked influence from the great composers of his homeland, Shostakovich, Prokofiev, and Rachmaninov. His music also has undeniable cinematic qualities and, in the Ouverture, it’s Chaplin that comes to mind! Let’s say that this one also had a certain sense of melody. The work most directly inspired by his native Russia is undoubtedly the Ouverture « Maslenitsa », Op. 36, created in February 2013 in Chicoutimi in a northern environment that fit it like a glove.

The big piece here, though, is Ichmouratov’s first symphony, « Sur les ruines d’un vieux fort », opus 55, dedicated to Marc David and the Orchestre symphonique de Longueuil, who premiered it in 2017. The work depicts the history of the city of the South Shore, from the time of Charles Le Moyne de Longueuil to the present day. The work might particularly appeal to fans of large-scale science fiction films, with accents reminiscent of John Williams’ Star Wars in the final movement. This is also an indication of the quality of the orchestra, which plays this music with aplomb and finds obvious pleasure in doing so. It’s necessary to insist on this point, the OF being an orchestra which gives itself a pedagogical mandate and a good part of whose membership changes each year. Its conductor and founder, Jean-Philippe Tremblay, has once again done a remarkable job.

The Orchestre de la francophonie has already released several recordings with Analekta, including nothing less than the complete symphonies of Beethoven, but it was Airat Ichmouratov, who had already released a first CD there last year, who took the OF with him to Chandos. Both remain to be watched.