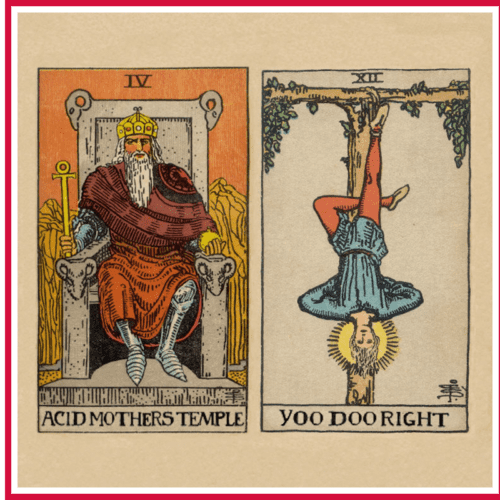 After a 42-date North American tour in 2018, the legendary explorers of Acid Mothers Temple and the apprentice shoegazers of Yoo Doo Right are reuniting to seal their friendship on this short release, the proceeds of which will be donated to Protégeons Montréal-Nord Ensemble and Camp Unist’ot’en.

On side one, “Silver Points and Lines” opens with a hypnotizing cosmic frequency ride, followed by an epic, interstellar jam that only Japan’s AMT have the secret to. Since the ’90s, the collective of variable geometry has seen nearly 30 members spread across Japan, forming a kind of family, called a “soul collective”, around guitarist Kawabata Makoto.

On the B-side, the track “Speed Guru”, whose melodious and slightly oriental guitar is intermittently crushed through effect pedals, some crafted by the guitarist himself. This contrast forms an impressive sound barrier that borders, in concert, on the power of a plane in takeoff. Since forming in 2016, Montreal-based combo Yoo Doo Right has been generating a sound inspired by the improvised rhythms of krautrock and imagined as “a car crash in slow motion”, giving the illusion of being crushed by the centrifugal force of a wall of death. This shared mini-album precedes the release of a debut album entitled Don’t Think You Can Escape Your Purpose, to be released on local label Mothland Records next fall, when Yoo Doo Right may well have a rendezvous with destiny.