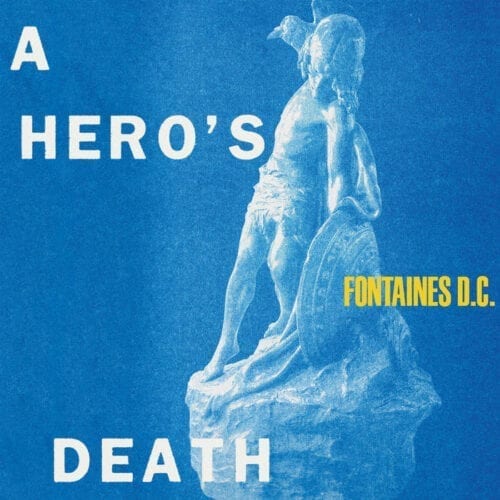 Following the three singles released over the course of the year – the title track, “I Don’t Belong” and “Televised Mind” last month – one might already have a sense of the tone of this second effort by the Dublin-based band. Eighteen months after the release of their highly acclaimed debut album Dogrel, Fontaines D.C. once again called in producer Dan Carey, but this time opting for a slightly darker, more melancholy ambience than on Dogrel. A Hero’s Death is a more complex and difficult album than the previous one, a record that aims to balance between joie de vivre and depression, according to singer Grian Chatten. The fact remains that, when listening to the 11 tracks that make up this second album, one would lean more towards the dark side than the light. With A Hero’s Death, Fontaines D.C. cast a raw and lucid glance on the state of the current world. It’s a record less “punk” in tone, less nervous and frenetic, but more “no future” in spirit, with a hint of hope all the same. A bit less reminiscent of The Fall but still suggesting Oasis at their best (a feat considering the number of duds written by the Gallagher brothers), Joy Division, the Velvet Underground (the excellent “I Was Not Born”), John Cooper Clarke for the more spoken than sung aspect, and the psychedelic blossoming with the unexpected and aptly named “Sunny”, A Hero’s Death shows that the Irish band managed to go beyond the hype and fame generated by the success of their first record to offer an introspective, intense and authentic album.