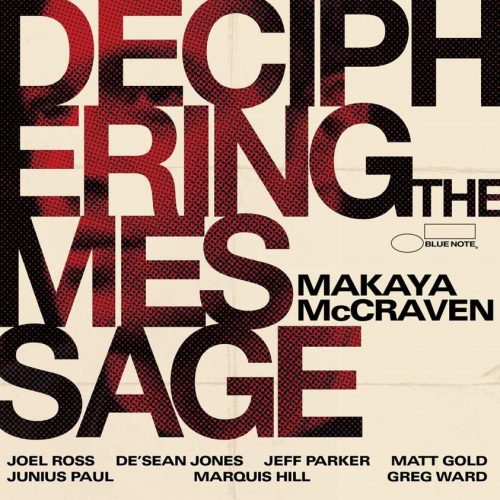 Blue Note, surely one of the most renowned brands in jazz, has given virtuoso percussionist and visionary composer Makaya McCraven access to its archives (especially from the ’50s and ’60s) as the basis for his new album, Deciphering the Message. So what is the link between the Chicago visionary and this archive? The approach is that of a musician and beatmaker at the same time, that is to say, re-reading old recordings and making new music with his team, composed of guitarists Jeff Parker and Matt Gold, bassist Junius Paul, trumpeter Marquis Hill, saxophonists Greg Ward and De’Sean Jones, vibraphonist Joel Ross.

Thus, this established generation of hip cats draws on Art Blakey & the Jazz Messengers, Kenny Dorham, Horace Silver, Hank Mobley, Wayne Shorter, not to mention the MC Pee Wee Marquette. McCraven proceeds in the same way as on his previous albums: drawing loops from the archives, rearranging, superimposing new basslines, new keys, and hip-hop beats on the hard bop and funk swing of 60 years ago. This is reminiscent of the acid jazz acts of the 90’s, such as Jazzmatazz & Guru, US3, DJ Premier, Buckshot LeFonque (Brandford Marsalis), Groove Collective, Ronnie Jordan, Brand New Heavies, Donald Byrd and the subsequent, even more hip-hop treatments of JDilla, A Tribe Called Quest, Madlib, Digable Planets and others Pharcyde.

McCraven’s added value is not as innovative as his previous proposals, as if the electro-acoustic beatmaker and jazzman had been intimidated by the historical recordings he drank from. The results are not as substantial as In The Moment (2015), Universal Beings (2018) or his more justified and successful re-creation of Gil-Scott Heron’s I’m New Here. That said, let’s also remember that the groove is there, the musicianship is there, the coolness is there. Don’t miss these more expert considerations and take the trip from today to yesterday.