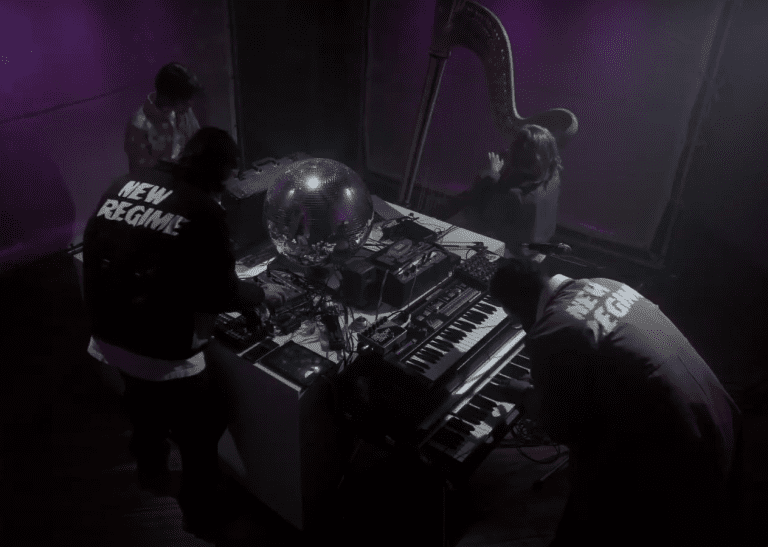 The digital creativity to which Porto Porto! subscribes foresees all the associations, all the amalgams, a great diversity of references. The four artists based in Montreal, with distinct origins, pave the way. Samito from Mozambique, on Fender Rhodes, programming, voice.  Alex Tibbitts from California, on harp, machines, voice. Quan from Vietnam on modular synthesizers. James Benjamin aka Boogieman, from Montreal, keyboards, synths, and programming.

In the short time since forming, Porto Porto! have already recorded a lot, both audio and audiovisual, and has performed little in front of an audience. This justifies this conversation about this ambitious concert with guests, performed at M-Telus in its world premiere on Saturday, August 28 as part of MUTEK’s Nocturne series.

PAN M 360: We have an idea of what Porto Porto ! is premised on, and we want to know more about it. Can you tell us the genesis of this project?

James Benjamin: This is a fairly recent project. With the pandemic, it started last year. Samito and I had a collaboration, we played MUTEK in 2020, and then I got the duo and the new elements together at Breakglass Studios, which I’ve been a co-owner of for the past 12 years and has helped me a lot in my own music career. We started making music together on the fly, seeing where it was going. As the sessions went on, pieces emerged, we did a lot of recordings, we touched many musical ecosystems. And we became good friends. This change is natural, we’re ready for the next step.

PAN M 360: After listening to the first recordings, we could suggest that Porto Porto ! offers ambient electronic, sort of chillwave combined with different rhythms and also an influx of spacy electric jazz in the stream of the Miles Davis sessions between 1968 and 1972. How would you describe it yourself?

James Benjamin: This description is accurate, but our music also goes stylistically somewhere else. This Porto Porto music has become a real melting pot.

PAN M 360: Porto Porto! isn’t only about ethereal music, there are composition aspects. Can you talk about it?

James Benjamin: Of course, there is an experimental aspect to our music, but we are also all interested in composition. Samito and I have been working together for a few years, we also think about hooks and song structures. Samito is also a natural producer. And I like to see myself as that too. So all these influences are tangible, our next show will provide the creative framework for the upcoming album.

PAN M 360: Let’s take a look at the instrumentation.

James Benjamin: Okay. The instrumentation is based on modular synthesizers built by Quan – this guy has a very interesting mind, he designs his own instruments from scratch and he has his own company for modular synths, so we both play modular synths and we learn a lot from each other. Samito also plays keyboards, mostly the Fender Rhodes. Alex Tibbitts plays what she calls a bionic harp, an analog instrument that can also generate sound effects beyond the harp’s natural sound. She is also connected with some software and computers. So with these excellent trained musicians, we thought that it would be really cool to record long sessions, even suites.

PAN M 360: The upcoming show is another step, there will be more.

James Benjamin: For this show, we are adding bass. In the studio, we teamed up with Milo Johnson (Busty and the Bass), a fantastic bass player and composer, and recorded a few sessions. The addition of a great jazz bass player allowed us to explore other sounds with our keyboards. For the MUTEK show, however, Milo will be replaced by another bass player, as he’s currently in British Columbia and cannot travel across the country. There will also be two string players who will accompany certain parts of the music. So this will be the first time we will be presenting a whole bunch of songs and movements, different feelings, moods, vocal lines, hooks and also experimental stuff.

PAN M 360: Are there conceptual leaders in the group?

James Benjamin: It’s always evolving but this music comes from the four core members. When we started playing together, we tried to exercise that each person would be able to lead and listen carefully to each other. So things get pushed in different directions and also things get pulled into the center. It’s a team project, everybody waves in, they all say what they want to say, it’s all about consensus, we’re all making music together.

PAN M 360: So there is important evolution since the Boogieman and Samito experience.

James Benjamin: Indeed, it’s quite different but it is also an expansion of this duo, now it’s becoming an universe. There are a couple of tracks that are ready to release, an album will follow. The show at MUTEK will give you an idea of this sonic universe and the album, it will go to different places but there will be threads that connect it all.

James Benjamin: Ambitious is a good word to describe Porto Porto. In my mind we could eventually have an orchestra around it. Our thing is not just experimental improvisation, these are trained players who read charts and chords,  who really know about what they’re doing. One step at the time but… we intend to add orchestral works around this.