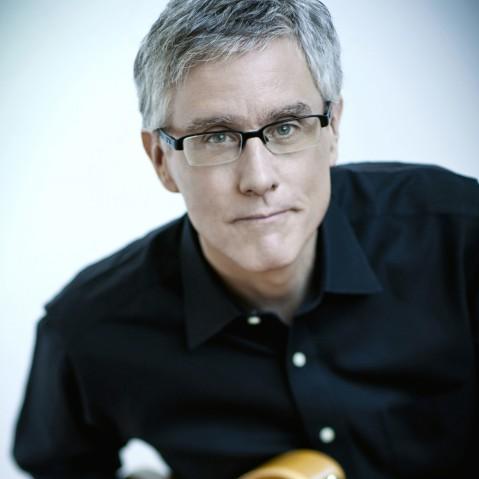 40 years of career! Quebec electric guitarist and composer Tim Brady is spreading the good news of written and/or improvised art music based on the particular language, timbral and sonic characteristics, and unique personality of his favorite instrument. Brady has just released a triple album, gathering a set of polymorphous recent works (just like his creative personality) but also others drawn from his archives (gems we had never heard before!).

I took the opportunity of this outing to speak with the Montreal composer. A luminous meeting where one feels privileged to be in the presence of such a kind, visionary, simple, discreet, inspired and important human being for the history of music, all music!

Tim appears in the Zoom window, and I quickly ask him why he released three albums at once?

Tim Brady : The pandemic has left me with a lot of time on my hands, just like everyone else! I took the opportunity to create and polish a lot of material and go back into my archives. I had enough for three records, but I figured it would be boring to spread it out over three years, so I released them all at once! That’s the practical reason, but there’s also a more symbolic reason. In 40 years of career, the media in general have never been able to put me in a category (they like categories!). So I wanted to thumb my nose, in all kindness of course, at this divisionist obsession by putting on the market a large package of works of a very different nature from each other, and therefore unclassifiable as a group!

Tim Brady : Yes. The set is divided into three parts, like the number of records. The first part is my solo work, with sampling and other electronic fiddling, the second is my three-instrument concerto Triple Concerto: Because Everything Has Changed (me on electric guitar and programming; Helmut Lipsky on violin and Shawn Mativetsky on tabla and percussion). The third one is focused on my chamber band compositions. As you can see, the more we go on, the more musicians we have!

Pan M 360: About the archives, what are they and why did you choose them?

Tim Brady : Revolutionary Songs is a 1995 recording that I’ve always loved. But I was unhappy with the mastering. I reworked it extensively several times, in 2007 and again in 2013. This time, I thought it was worth releasing. As I said, I really like this piece. As it Happened, also on the 3rd album, is an extraordinary moment captured live by mistake! The Record button was activated when I and the musicians started playing for 30 minutes without error, in a perfect way, and it was captured. It had to be available!

Pan M 360: As someone who grew up with improvisation, how has your use of the art changed since you started?

Tim Brady : It’s interesting. Forty years ago, I was concerned about labels. Do I play jazz, free improv, contemporary written music, musique actuelle? Today, I want to use the kind of sound, the kind of rhythm, the kind of technique that I want at the right time for me to express the things I feel strongly about at the time I need to express them, regardless of the label. If I feel for an F major chord there, then a 39-note cluster here, followed by an improv somewhere else, I do it. Improv is a tool in my palette, not necessarily a way of life.

Pan M 360: What is the most central element of your music, then?

Tim Brady : Structure. You’ll notice in all of my work an organization, a structural skeleton that organizes the different elements, whether they’re written or improvised, tonal or atonal, etc.

Pan M 360: The musical world has changed a lot in the last 40 years. In 1980, we were still in the Guitar Hero era. Today, Hip Hop and Rap have taken over. Are there any Guitar Heroes left? Is there still a relevance to it, and what is the future of the electric guitar?

Tim Brady : That’s a fascinating question. Today, Youtube is where rock and great guitarists get their exposure. Radio is pretty much dead for them. Rock is becoming a source of reflection for top guitarists. It’s no longer just a goal, an objective linked to popularity or the hit parade. Take the example of indie rock : the line between rock and contemporary chamber music is often thin. I receive several emails a year from young guitarists asking me about my approach. Recently, an Italian guy contacted me, he is doing a PhD on my music!

Of course, the musical base of the electric guitar will remain linked to blues, jazz, metal and a form of rock, but I am convinced that art music will become a new pole of expression, which will certainly create links with the others. Forty years ago, there were at most a dozen guys on the planet doing what I do. Today, the number is exploding. The electric guitar, like rock, is going down in history. In this process, there is an intellectualization and a search for depth that comes with it and transforms the way of perceiving the instrument and all its paradigms.

Pan M 360: How do you feel about this phenomenon, especially considering that you are one of the “pioneers” of its scholarly side?

Tim Brady : It’s fun, I must admit. I was reading the Wikipedia article on the instrument one day, and I saw my name mentioned. I’m proud of it, for sure. There’s even an Italian (another one), Sergio Sorentino, who wrote a book on the history of the electric guitar and included a section on me in it, along with Fred Frith, Scott Johnson, and others as important. It’s ego-boosting, of course, but more importantly, it makes me happy to know that I’ve made a positive contribution to something lasting!

Pan M 360: In your music, you use electronic drapery in a broad, full, almost symphonic way. Am I wrong? And if not, why is it so?

Tim Brady : You are right! But I’d go even further: when I compose for an orchestra, I’m constantly trying to recreate a guitar sound with pedals, and related effects! That’s where it comes from: I’m an electric guitarist, and I always play electric guitar. I try to play at least two hours a day. Many composers eventually give up playing their instrument, and develop a more “abstract” conception of orchestration. I’m never far from my instrument. It rubs off on my orchestral scores, and conversely, it also rubs off on my electronic writing, which looks like, as you say, an orchestra that looks like a guitar with pedals, fuzz, and all the rest! I build with masses, with densities, or on the contrary, I build solo lines. But I do very little counterpoint. All this comes from the nature of my instrument, imprinted in me, and the fact that it is always at the center of my practice.

Tim Brady : I had that desire, as did probably every teenager of that time who played (even if only strumming) the guitar! My idol was Duane Allman.

Tim Brady : The truth comes out in two parts. First, I’m the straightest guy in the world! I don’t smoke, I have no interest in drugs and I don’t drink. It’s always been that way, even when I was young! So the rock culture didn’t appeal to me at all.

The other thing is that to be a good rock musician, you also have to be a good songwriter. You have to come up with melodies that are catchy, and that can say the essential in 8 bars. I’m more comfortable with longer forms. I accepted it rather early in my life, rather than fighting against a desire finally not compatible with my character.

Pan M 360 : Do you remember the first time you realized that this was YOUR way?

Tim Brady : Yes, I do. I was 27 or 28 years old. One of my works was recorded by the CBC. It was for strings and a trumpet improviser, the great Kenny Wheeler in this case! I remember thinking to myself as I listened to the musicians play: “Geez, that’s my music! I’m the one who created these sounds that go great together! That’s what I want to do! I became aware of the expressive power of music, at least as I saw what creative power is like. I’ve never forgotten that.

Pan M 360 : What are you working on that is more substantial in the foreseeable future?

Tim Brady : Something big and crazy. A cycle of four operas, entitled Hope (and the Dark Matter of History). The four operas will be linked by a central character that recurs in each one: a time traveler. This will allow me to visit four different eras: 1939, 1970, 2051 and 2056.

The 1939 opera will take place in New York City and will be set in the minutes before Charlie Christian, the founding father of electric guitar playing, takes the stage at Carnegie Hall! The opera will even feature Rufus Rockhead, a Montreal jazz icon and founder of the famous Rockhead’s Paradise in Montreal!

Pan M 360 : And unacknowledged (in my opinion) inspiration of the Jazz fest!

Tim Brady : A great character indeed! The second opera will take place in 1970 in Montreal, the 3rd in 2051 in Toronto during a climate catastrophe involving humans and artificial intelligence beings and the last one will take place in 2056 in a Martian colony. If all goes well, the operas will be created in 2022, 2023, 2024 and 2026