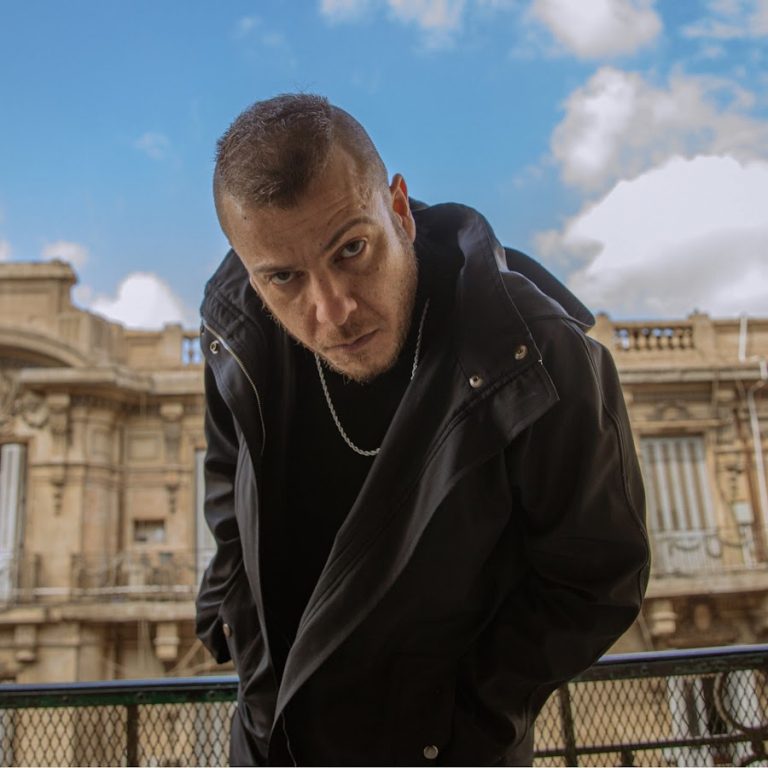 In the last few years, the Arabic electronic/hip-hop band 47Soul, led by Tareq Abu Kwaik, have performed a few times in Montreal. Without a doubt, some of the best Arabic grooves in the world today! Based in London, this explosive Palestinian unit express their people’s deep considerations and concerns, needless to say. To achieve this musically, 47Soul fuses chaabi, hip-hop, electronic dub and dubstep, a very personal style the band calls Shamstep.

A week before his concert at the FMA, PAN M 360 had the opportunity to talk to Tareq Abu Kwaik aka El Far3i. Here are our questions, here are his answers.

PAN M 360: Can you identify the main formal differences between your solo project, and 47Soul and El Morabba3 before that?

Tareq Abu Kwaik: My solo project El Far3i is very focused on the freedom to express using different types of production as mediums for musical ideas, words and thoughts. For that reason, it focuses on the idea of a rapper that plays guitar and a singer that sings their hook on their own rap verse. Just like El Far3i allows freedom to do organic acoustic music and rap, songs over beats, collaborations with producers and forming musical groups is also a part of the meaning of El Far3i. The branch cannot grow if it hooks off from the tree… to say that your growth as an individual is not separated from the growth and wellbeing of the group. I co-founded El Morabba3 in 2009 as an Arabic independent band with some rock influences, and later co-founded my current band 47Soul as an electronic and shaabi (Shamstep ) group… In the end I am trying to say that each one of us fits or belongs even in several spaces and groups, but that should not stop the freedom to grow the self… there should not be compromises. We are both social brings and individual souls.

PAN M 360: As an artist who is fond of discoveries and sound exploration, you fuse Arab folk music and hip-hop. Since the ’80s we have observed many bands from South Asia and the U.K. who fuse hip-hop, electro and their own culture—Asian Dub Foundation, Monsoon, Talvin Singh, much more… From Arabic and North African culture, we had Hamid Baroudi, Transglobal Underground, Natacha Atlas, Zebda, Acid Arab, Gnawa Diffusion, Emel Mathlouthi, Khaled, Rachid Taha, and so many others. All those experiences happened mainly through immigration to the U.K. and France. So… what about the Middle East and North Africa? What happened? Who were your models when you grew up? How did you imagine your own sound?

Tareq Abu Kwaik: First, I must say after this great list of artists you’ve put down, that it was an honour for 47Soul to collaborate with Asian Dub Foundation on the track “Human 47” from their latest Access Denied (Deluxe). We’ve always looked up to them as legends! As far as the influence in our region, you can say in a way with exceptions my generation was the one that started fusing stuff more, but we are certainly influenced by Khaled, Rachid Taha, Mohammad Munir, Mohammad Muneeb, Ziad Rahbani, George Wassof and all the Shaabi sounds, Dabkat, Mijwez, Choubie… then everyone adds whatever they like from outside the region. For me it was Anthrax, Deftones, Cypress Hill, Lupe Fiasco, Bob Marley, Michael Jackson. And as far as my generation, regional and local inspirations from DAM, Ramallah Underground, Autostrad, Abyusif, etc.

PAN M 360: Your Bandcamp page says that you are from Amman, Jordan. Do you go back to Palestine on a regular basis? Do you spend a lot of time in Europe and North America? Where are you based now?

Tareq Abu Kwaik: I lived in the USA for five years in the early 2000s, and I have been based in London for the past six years. I am the product of my city, Amman, where I spent most of my life and the almost yearly visits to Jenin, Palestine. I am a Palestinian Jordanian with a Yellow Card… it’s not the worst… but let’s not get into the Palestinian identification and travel document colours and types, as that would be very long.

PAN M 360: Is there a Palestinian musical specificity in your craft? Traditional melodies? Traditional instruments? Some forms of shaabi?

Tareq Abu Kwaik: In my group 47Soul, there certainly is. In my solo act, you’ll find that in some beat samples, or in the vocal style over the guitar sound.

PAN M 360: What were your inspiring sounds in the beatmaking? Hip hop? Trap? Drill? Electronic groove in general?

Tareq Abu Kwaik: While I do produce some beats under Arab Drumz [“a music production and artist development company with focus on Arab experiences throughout the world”], it’s not my main work, I usually collaborate with producers for my rap tracks and many times we co-produce. Generally, I love it all. I like experimenting with the Shamstep vibe, similar to production work I do in 47Soul but with some trap and drill influence… speaking of which, while the instruments are a bit different, what we call Shamstep is not very different from a typical drill beat.

PAN M360: Lyrically, what are the main topics  of your solo songs? Sorry for my ignorance of the Arabic language.

Tareq Abu Kwaik: From love to individual and group search for control over one’s own destiny, to Arab hopes and Palestinian struggle, to politics and religion… Arab problems, mental health, struggles for enlightenment, world unity, the power of love and the spirit of unity…

PAN M 360  How do you see the tension between poetry and sociopolitical engagement in your writing approach?

Tareq Abu Kwaik: I’ll leave that to the listener to answer…

PAN M 360: What is your solo concert setup? Alone? With a band? What’s you gear?

Tareq Abu Kwaik: It’s a singer/songwriter with a guitar that transforms into a hip-hop show with an MC and loud beats… Then goes back to do a guitar outro …

PAN M 360: What are your next projects in the near future? Your next dreams?

Tareq Abu Kwaik: I am close to releasing my third acoustic album, which concludes a trilogy and finishes a story related to the meaning of El Far3i. Then, continuing to release music that combines my hip-hop with my songwriting, maybe in a form closer to pop. Something I started calling El Far3i Flux. I am also celebrating the tenth anniversary of my first two acoustic and rap albums, Soat Min Khashab and Far3 El Madakhil, in February 2022…

PAN M 360: Many thanks for your answers and welcome back to MTL!

Tareq Abu Kwaik: Thank you. Last time I was in Montreal with 47Soul, it was a great vibe! I am now truly looking forward to this full rap-and-guitar El Far3i solo show.

El Far3i is performing at the Club Soda next Thursday, November 11, 20h.