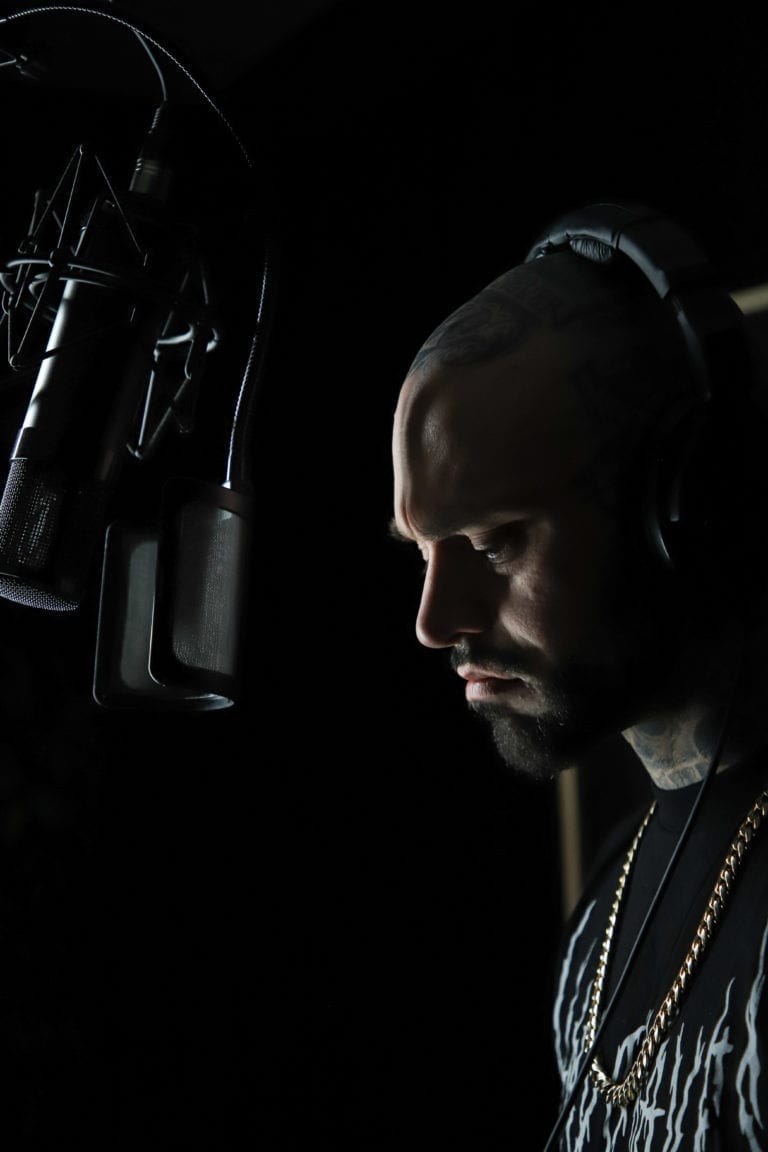 Kevin Saint-Laurent, a key figure in keb rap, fell into it when adolescence hit, and soon found himself cooking up his first gangsta potions, while going through difficult times, from petty crime to incarceration. Today, his hip hop baggage exceeds two decades – he’s been recording non-stop since 2009. Conceived around stories inspired by life away from the spotlights, the freshly released Backstage arrives care of the 7ième Ciel label. Things being how they are, we reached Souldia by phone, not in the green room, but in his living room.

Souldia is on the line from the greater Quebec City area. Originally from the Limoilou district where he came of age, Saint-Laurent has been living happily on the outskirts of the capital.

“My maturity as a man, my musical exploration, my choices of collaboration are the main indicators of my recent evolution. In my mid-thirties, I’m certainly not writing the same lyrics as I did ten years ago. My way of life has changed, I’m at an age (35) where one wonders if the choices made in the past were the right ones. I can’t change the past, but I could do better in the future.”

Souldia’s approach remains the same in spite of the experience gained, as the 18 songs on Backstage’s programme attest.

“What I’m still doing now is 360-degree reality rap. I’m inspired by life, my own life and the lives of the people around me. It can come from a simple phone conversation.”

“The song ‘Backstage’, performed with Eli Rose, embodies the concept of the album: behind the curtains of the stage, and behind the curtains of my life. I tell my vision of things, on tour, from town to town. I confide my concern about keeping my family together through all this. I like to take my family on tour with me, and make them live that experience. My wife is a real-estate agent by profession, but she still helps me a lot artistically. Her opinions count in my choices, she has a very good musical ear.”

According to the lyrics of “Magnifique”, Kevin’s father was no angel, but his wounded soul bore enough goodness and charm to spark filial admiration.

“My father was my best friend. He passed away in 2012, so I’ve been thinking about doing this song for eight years. Until recently, I hadn’t found the words or the music, I didn’t know where to start, I really had to think about how I could talk about him. It was tricky. We’ve got less than three minutes to make this work! In the end, I tell his story while giving the impression that I’m talking about myself. In the chorus, you realize that he’s the one I’m talking about.”

The biggest star of keb rap also lent a hand:

“I’d never done songs with Loud before, I’d wanted to do that for a long time. We knew that the day he and I would do a song together, it would be explosive. ‘Rêve de jeunesse’ will be useful for both of us over the next ten years!”

Other big shots participated, on which Saint-Laurent comments:

“‘Nouveau Soleil’ brings together Eman, from Alaclair, and FouKi, who are very talented artists, who can take us to their own planet. So I created a song with them to take my audience on a journey with them.”

“‘Every Day’ was made with White-B, with whom I worked on my song ‘Le Bonheur des autres’. I still wanted to have a one-on-one with this artist I respect a lot, and who I think will become important in the years to come. ‘Mega Mulla’, with Tizzo, is one of my favourite songs on the album. Tizzo is also an artist to watch closely. Recorded with les Sozi – the Pelletier twins – with whom I learnt to rap, ‘Joyeux Noël’ marks my belonging to the Limoilou neighbourhood.”

Apart from all these appearances by keb rappers, there’s a significant dose of hexagonal rap in Backstage:

“‘Rouge Neige’ features Sinik and Seth Gueko from France, joined by Quebecer Rick Pagano. I’m proud to have Sinik as a partner, I’ve been working with him for three or four years, and he invited me to Paris for the launch of his album at La Cigale. In France, Sinik introduced me to Seth Gueko, who’s also a pillar of the rap scene over there. And then I got involved in the production myself. I was joined by Rick Pagano, a former contestant on La Voix, also a guy from Quebec City, and we became good friends. So I managed to create this mix of French and Quebecois, because our rap roots are the same.”

Souldia worked this time with a cohort of beatmakers – in addition to the main ones mentioned, there are Oni, Ajust, Realmind, Toosik, DJ Manifest, Major:

“I’ve been working with Farfadet and Christophe Martin for a long time now and they’re always by my side. Ruff Sound is back for the track with Loud, ‘Rêve de jeunesse’. Ruff Sound is a big name, he worked a lot with Loud, it wasn’t hard to unify all that on ‘Rêve de jeunesse’. Koudjo and Dfresh worked on SKRAB, they’re excellent Quebec beatmakers who’ve worked on French rap hits.”

Among the most prolific artists of the keb rap scene, Souldia wants to avoid any redundancy:

“I really don’t like to stay in the same niche, repeating the same flows from my previous albums. That’s why I also listen to music that’s different from hip hop… which is one of the only kinds of music that can be mixed with any other musical genre. Within hip hop, I also like mixing: hard rap, afro-trap, old-fashioned boom bap, scratches from my friend DJ Fade Wizard.