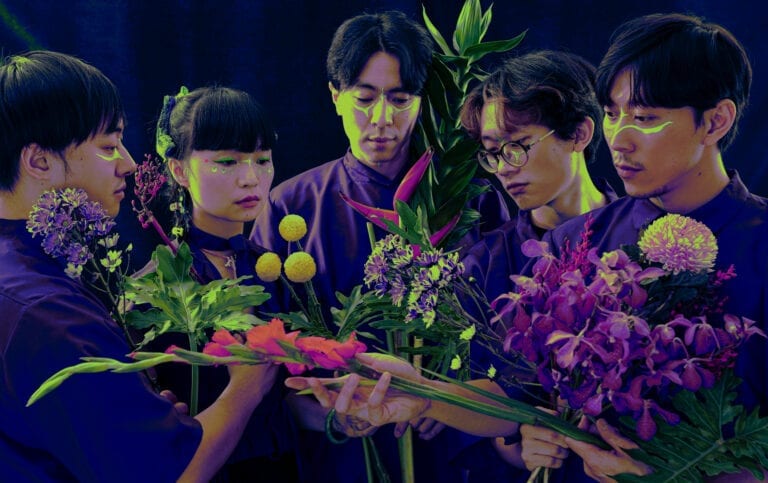 Prairie WWWW: Premonitions of the past

In the courtyard of a traditional sanheyuan, Taiwan’s electro-mystics Prairie WWWW bring their latest EP Formosan Dream to life.

Since 2010, Taipei-based quintet Prairie WWWW have explored the complex and often obscured roots of Taiwanese identity with their haunting, electro-mystical art-rock. Not long after the early-October release of their new EP Formosan Dream, the band premiered a filmed performance of the material at Audiotree International, the American concert-streaming platforms’s wing for interesting indie music from around the world. The session is embedded below, for the gratification of your eyes and ears.

PAN M 360 corresponded with Prairie WWWW (the four Ws are silent, by the way – “serving as a pictogram for a waveform, as well as the imagery of the grass that blowing in the wind,” the band explains), and learned more about the live session and the EP from drummer White Wu, percussionist Yi-Zhi, and bassist Apple.

PAN M 360: What were the circumstances of this live session? Where was it filmed, and why was that site chosen?

Apple: We wanted to capture a certain atmosphere and the colours of the summer sun, so the shooting had to be finished before noon. Because it happened to be the hottest month in Taiwan, and always raining in the afternoon, when taking a break, we had to use many umbrellas to let the equipment dissipate heat. Many difficulties needed to be overcome during this video shoot.

It was located at a traditional building called a sanheyuan, owned by our agent’s grandmother. Sanheyuan are really rare now, and that fits well with our new songs. We stood in a circle in order to shoot everyone playing their instruments, also to show this beautiful building from all angles.

White: As Apple said, before the shoot, we had worried about the heat and sunburn. (I can’t stand the heat – no joking, summer in Taiwan is killing me!) In fact, the front yard of the sanheyuan is designed for farmers to dry crops, so the direct sunlight there was actually fierce for people. Once finishing one take, we had to go into the shade, drink water, and cool down our equipment. Although almost everyone had heat stroke after shooting, it went more smoothly than I expected, an unforgettable experience for me. Fortunately, we finally did it.

The traditional sanheyuan is considered to be quite a representative architectural style in Taiwan. In my opinion, it seems that few Taiwanese bands shoot live sessions in such venues; that’s why we chose it. We also want to show the uniqueness of Taiwan’s traditional architecture to fans overseas.

PAN M 360: How would you say Formosan Dream is different from Pán and other, earlier Prairie WWWW recordings?

Yi-Zhi: Half of the songs from Pán had been written and edited for about 10 years, and they tended to be composed with strong rhythms and beats. The story in Pán is also more complicated, combining the life experiences from the five members.

However, Formosan Dream is a new beginning for us. We began to re-collect and investigate Taiwanese folk tales, legends, and the context of traditional music, trying to reorganize these stories buried in Taiwan’s colonial history and politics into our own creation.

PAN M 360: The lyrics and music of the track “Formosan Dream” both strike me as being about the past, or more specifically, about all the futures that didn’t happen. Maybe they still could?

Apple: The lyrics of “Formosan Dream” are about the disappearing ethnic groups of Formosa Island. They are all part of Taiwan’s forgotten history, and this is how we dream of the island. We live for our past, for our ancestors, and for ourselves. Only when we understand our past can we have a future. We think our future is about national and territorial identity. Here’s a translation of the prologue from The Mystery of the Dwarf, by Taiwanese historical novelist Wang Jiaxiang:

“People said there are still mysterious and invisible tribes living on mountains, completely isolated from civilization. In archaeology, ethnography, and the oral history of Taiwanese aborigines, they have existed so truly; this is an excellent source and subject matter for fiction authors. One day, I hope that Taiwanese teenagers can start to use the power of imagination to look at Taiwan. Only a Taiwanese is able to imagine their own land with honour, pride, identity, and sense of history to impress people; only when the Taiwanese begin to understand ourselves can we walk into the future.”

PAN M 360: “Whales’ Bones” is an interesting interlude, a bridge between the two main tracks – but that bridge goes over something deeper and bigger than the story of human beings.

Yi-Zhi: The sound effects from “Whales’ Bones” are a foley of the mountains and jungles in ancient Taiwan. “Whales’ Bones” is an abstract space-time passage between the two songs, “Formosan Dream” and “Shells”. You can imagine “Whales’ Bones” as an archaeological layer, like the memories piled up by various historical events. This song was also inspired by Taijiang Inland Sea, the place where whales once gathered in ancient Tainan.

PAN M 360: “Shells” is, to my ear, about memory, both to be cherished and to be wary of. How would you explain it?

Apple: Every time I think about myself and my soul, I start to wonder: where my soul will go after life? Will my consciousness still exist? Is it like falling asleep without dreaming, nowhere to go? The only thing left of life is bone-like objects, or like fruits, turning into mud. Life in shells disappeared, but they still flow around the world with the current. No one remembers, no one knows their past, only shells themselves can prove their being.

Yi-Zhi: “Formosan Dream” symbolizes the lost ethnic groups, species, languages, culture, and the environment. The past history of Formosa Island cannot be fully reproduced or proved. “Shells” stands for that which still faintly exist today, like remains, bones or memories.