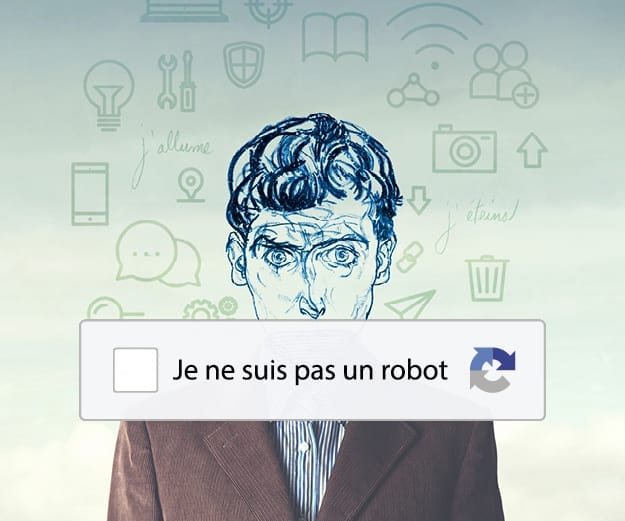 Jérôme Minière and Quasar in a retrofuturist show

Jérôme Minière and the Quasar saxophone quartet team up for the presentation of an ambitious, tragic, and experimental technopera-ballet

It’s the meeting of two universes, the virtuoso contemporary music of the Quasar saxophone quartet and the more pop, poetic and slightly mischievous one of Jérôme Minière. Je ne suis pas un robot is a tragicomic and experimental technoper-ballet that explores our intimate relationship with the world of computers and technology, and the increasingly tenuous frontier that exists between the human and the machine. PAN M 360 spoke to its three main creators, to find out more.

Jean-Marc Bouchard: It began in 2018, when I met Jérôme. We spent the summer working together [as part of the Épicerie musicale project that Minière was the instigator of], giving concerts in all the city’s parks. We were behind kiosks, dressed as market farmers. We sold vegetables, and with the vegetables came a song. The idea behind it was that you have to eat good organic vegetables, but you also have to nourish your spirit, with art, music… We had our theme, which Jérôme had composed, which we played three or four times per block of groceries, and we jammed to it. We had Eric West on the double bass, Jérôme strummed his chords, and I jammed with the others.

He’s a pop singer but an experimental one, and we’re an experimental band, but we’re not afraid to tap our feet when it’s swinging. So I thought it would be fun to do a concert together. A concert of a slightly different nature, more a show than a concert.

Jérôme Minière: At first, there wasn’t necessarily a subject, we brainstormed together, but I’d say the spark came from their side. They were already playing a very complex piece called “Hello” [by German composer Alexander Schubert, and part of the concert program]. They have to follow a very complicated metronome, with their earpieces, it’s really a difficult piece, and when they played it, they thought, “It’s not possible, we’re not robots!” That’s kind of the initial joke.

Marie-Chantal Leclair: On the other hand, it’s difficult to say exactly who had the idea for what. I remember that at one point, Jérôme presented us with a series of clips called La vie en boîte. It was the story of an unemployed man who goes into a computer, with an ironic touch, and I was drawn to it. One thing led to another, and we moved towards this theme.

JM: I wasn’t really keen on the idea of going into this field because I’ve tackled it in a lot of songs and projects in the past. It’s a subject that I’ve covered a lot. But in the end, we found another angle, because when we were discussing it, they were saying, it’s not necessarily negative, our relationship with machines.

PAN M 360: Between the time you began to throw ideas around, and the first show at the Ethel parking lot in Verdun in the summer of 2019, how did it develop?

JMB: The better it went, the more often we met, there was a sort of momentum. We exchanged emails, we called each other to discuss it. Jérôme would come up with a script, and we would see what we could do with it musically.

JM: One thing led to another, and there were people who got involved in the project as well. They work regularly with Jean-François Laporte, a brilliant inventor of sound objects. He invents some really quite fantastic things. So there was that meeting, and I, for my part, work a lot in a duo with my wife, Marie-Pierre Normand. For the past 20 years or so, she has always accompanied me, often in the visuals on the covers, and sometimes on stage, she has done live visuals, for example, with an overhead projector. So, we are used to collaborating together, and she got involved in the project.

PAN M 360: How would you summarise the theme?

JMB: Jérôme has been working for a long time on the problems of the internet, communications and all that, and he has an interesting formula that goes, “Is it the human who becomes robotic, or the machine that becomes human?”

MCL: The machine is taking up space in our lives, we know that. And then, there is a kind of love-hate relationship in that universe. In our lives, our machines, we love them, we couldn’t do without them, and at the same time, sometimes they irritate us, and we want to free ourselves from them. “I’m not a robot” is the box that we sometimes have to tick. At the narrative level, Jérôme will have to prove that he is not a robot, but it might not always be easy.

JM: The story is very simple, you log in, a series of events happen. It’s very commonplace, you do it every day, you sit down in front of your computer, you log in and at the end of the day, you’re still at the computer, so it’s sort of the most banal thing in the world, but in the end you deconstruct it a little bit and you question it. you bring out its strangeness a little bit.

The idea is that Quasar is a computer system, and I’m sort of the presenter of it all, the master of ceremonies. For the past few years, I’ve been working on solo shows where I’ve developed a strong relationship with technology, that is to say, I use software that is not normally used in shows, but rather for conferences, PowerPoint or Keynote, and I have a lot of fun with it. The idea is that we travel within a system, which I present. Quasar is the operating system, Jean-François is more like the hard disk, and Marie-Pierre and I are no longer in the desktop, the office.

When I say that I am the MC, it’s because I took charge of the part that concerns words and performance, whereas Quasar remains themselves, but in this context. So it’s the meeting of several universes. I find it quite touching because it seems that when there are no words, there are sounds, there is music, the interventions of Jean-François or Marie-Pierre. All of this is answered.

JMB: At one point, I said to Jérôme, “it would be fun for me to work with your equipment, then for you to work on Quasar’s equipment.” He came to rehearse with the rest of us, he recorded us, then he started making tapes with sounds that came from the saxophones. I took one of his songs called “Dans un magasin qui n’existe pas”, a song from about 10 years ago, and then I made an arrangement of it, the theme, and for a whole central part, I added a series of variations. These are quartets that stack up, one on top of the other, and it ends with 60 voices, where we play over ourselves.

JM: It’s a piece I’ve played with all sorts of people and which has had all sorts of redos like that, and then there, it has an arrangement by Jean-Marc that’s completely different in the central part, which is instrumental. It gave me great pleasure. If there was just this one song, I’d be delighted. I’ve been dreaming of a minimalist arrangement for years, it’s great!

MCL: As Jean-Marc said, there are 14 quartets of saxophones superimposed. At first there were just four of us, but afterwards we thought why not call in other musicians? So we asked other saxophonists to record parts and send them to us, and recruited 60 young amateur saxophonists. From high school to university students, from Los Angeles to Newfoundland, from Edmonton, Victoria, Rivière-du-Loup or the Saguenay. There’s going to be a giant screen behind us, and we’re going to be able to see all these young musicians who will finally join us, virtually of course, and who will make a new version of this piece. It’s being edited, because we’ve received more than 400 short videos, we have to organise that, but it allowed us to reach a lot of people we might not otherwise have reached.

JM: What’s a bit strange is that in this project, in 2019, we were dressed like the people who are facing COVID. We didn’t have masks, but…

JMB: In the first version, there was a scene where we were looking for a virus, a computer virus. As a joke among the rest of us, we told ourselves that we were precursors, not that we saw it coming, but it forced us to re-evaluate certain things.

JM: In the end, we thought it was less interesting in the context of this year. We could have kept it, but in the end we found it took up too much space.

Je ne suis pas un robot is webcast on Saturday, December 12 at 8 pm. Get tickets to watch the show here.