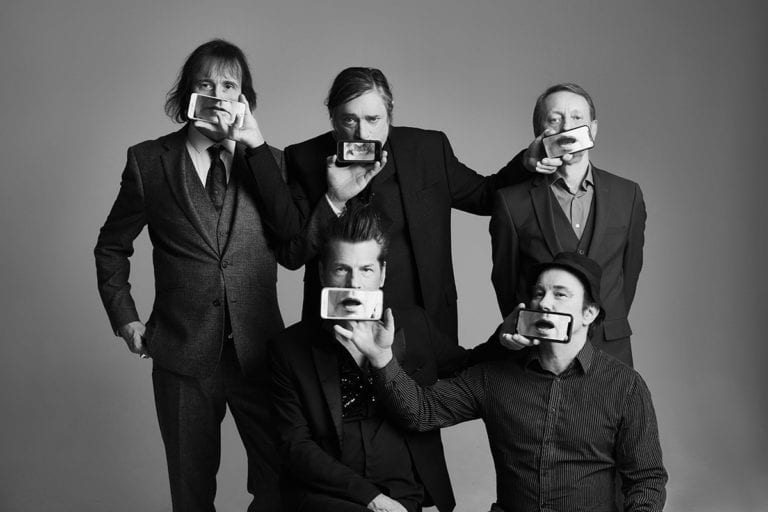 Einstürzende Neubauten: All is in everything

After four decades of experiments and sound exploration, Einstürzende Neubauten are still as relevant and forward-thinking as ever. To mark their 40 years of activity, the German industrial band presents Alles in Allem, a brand new album with which they remind us of their intense passion for Berlin.

It’s 4:30 in the morning in Montreal, and we have a video appointment with Blixa Bargeld at his Berlin home. No way to get a more accommodating time slot. That’s what his assistant tells us, Blixa prefers to do his interviews in the morning.

Always a bit overdressed, in a black suit, the man, in quarantine for 63 days (“I’m super careful,” he tells us), welcomes us in what seems to be his office. Behind him, we can see files, books, notebooks, impeccably arranged. White walls, no decoration. The leader of the German band – which also includes N.U. Unruh, Alexander Hacke, Jochen Arbeit, and Rudolf Moser – seems wide awake. He has just done three interviews before ours, and a few others will follow, because very soon Einstürzende Neubauten will release Alles in Allem, the fruit of 100 days of studio work and at the same time a review of the 40 years of activity of the Berlin noise collective.

“Alles in Allem is a fairly common expression in German, the sum of all sums. But in the context in which I used this expression, it’s more of a holistic statement that would rather mean, everything is in everything,” explains the singer and guitarist. “I’ve always preferred to name an album after the title of one of the songs on it. It’s a pretty classic method, I admit, but for this album, the original title was supposed to be Welcome to Berlin, except that the song “Welcome to Berlin” didn’t end up on the album after all. On reflection, I thought Alles in Allem fit well as a title, especially as our previous album was called Alles wieder offen. So there’s a sort of sequel aspect to it.”

Released in 2007, Alles wieder offen was the last “official” EN album, i.e. including new compositions and intended for the general public, but it’s not quite the last album from Einstürzende Neubauten. The German band hasn’t been sitting idly for thirteen years! There was the fourth installment of the Strategies Against Architecture compilations in 2010, Lament in 2014 (a studio reconstruction of a performance commissioned by the city of Diksmuide in Belgium to mark the beginning of the First World War), the Greatest Hits of 2016 (a rather ironic title), then Grundstück two years later, an album intended only for the band’s supporters, i.e. those who follow and help the band financially.

“I didn’t feel like making another official album, that is, intended for the traditional market,” says the former Bad Seed Bargeld. “But it was after I came back from Hong Kong in January 2019 that I got the urge to do it again. I couldn’t sleep because of the jet lag and suddenly I thought, it’s time to make a new album! So once again, with the help of our supporters, we decided to spend 100 days in the studio, and then there would be an album at the end.”

How was Alles in Allem created? Who are the fans and what was their role in this record? To these questions, Blixa Bargeld launches into a long explanation: “Crowdfunding was invented in 2002, before the term even existed. My wife (Erin Zhu) actually invented it and created the platform to collect donations because we wanted to do what we wanted to do, without the constraints of a record company, and for that you need money. So, depending on a certain amount of money, we allow fans to follow us live in the studio, listen to our rough mixes and give us their comments and suggestions. Then, we see if it makes sense or not, and if it’s a good idea, we apply it,” Bargeld explains.

“No record company would be willing to spend money on such a project. But thanks to our supporters, we can do it. It allows us to continue working the way we like, the whole band in the same room and not separated in several cubicles. I would even say that it forces us to concentrate on knowing that our supporters are watching us. From the moment we turn on the webcams in the studio, I know that we’re going to be efficient and that we’re not going to waste any time. So what we have to understand is that the fans don’t collaborate, they don’t tell us what to do, they tell us what they like or don’t like. And I think this kind of feedback is very constructive and important, just like a friend would do if you play your demo songs and asked him or her what he or she thinks, except that we have a lot of friends! So for this album, there is a single version and a box that includes an extra disc, a DVD that summarizes the 100 days in the studio and a 140-page book that tells the whole creative process of each song, from beginning to end. This box will be commercially available, but we are offering it to our supporters.”

Born in West Berlin in 1980, Einstürzende Neubauten has always afforded the city an important place in its music, an influence that is particularly apparent on the new album, with tracks such as “Am Landwehrkanal”, “Grazer Damm”, “Wedding” and “Tempelhof”.

“Of course this city is an influence. If you grew up in West Berlin and still live there today, you can’t forget the Wall. It’s part of you. For me, living in this city cut in two and lost behind the Iron Curtain was normal. Like I was on an island. It was when the band started playing outside Berlin, in Hamburg, Cologne and elsewhere, that I realised how different and unusual West Berlin was,” says the versatile musician, who has also collaborated with Carsten Nicolai, aka Alva Noto, in the experimental electro group ANBB.

“I left Berlin in 2002 to settle in San Francisco, then moved to Beijing in 2004, and returned to live in Berlin in 2010. The neighbourhood where I live (Scheunenviertel/Mitte) is the most expensive in the city, completely victim to gentrification with a lot of new modern buildings. But when I left in 2002, it looked like the Second World War had just ended the day before, with half-kaputt buildings, whose facades were still marked by bullet and shrapnel impacts. So I’m technically in Berlin, but for me, it’s not Berlin.”

Since their beginnings, the Neubauten crew have been advocating the use of the German language in their lyrics, but in the mid-’90s, they started to include lyrics in all sorts of different languages, a way of writing that has more or less become the band’s trademark – and Montrealers are the originators of it.

“We always had German lyrics until we started working with the Montreal dance troupe La La La Human Steps, who asked us if we could have more than just German lyrics. So we tried, especially with the album Tabula Rasa (1993), which was largely designed for this dance troupe. I managed to write multilingual lyrics for all the songs on the album and since then, I’ve never stopped writing in that way, I find it far too seductive,” Bargeld reveals. “For instance, ‘Ten Grand Goldie’ (the first single from Alles in Allem) has lyrics in German, English, Czech and Tagalog. There’s only ‘La Guillotine de Magritte’ (found on the box set) with lyrics in English only, apart from the title! But my wife prefers when I write in German…”

It’s in the bag

Apart from the multilingual aspect (and the emblematic logo!), the other characteristic of Einstürzende Neubauten is of course its DIY instruments, invented from scratch and not necessarily reused from one album to another. For Alles in Allem, the pioneers of industrial music opted for a common, everyday object, but one not as banal as it might seem. It all depends on what you do with it.

“You know those bags? In Berlin slang, they’re called migrant koffer (migrant suitcases),” laughs Bargeld. “You see them everywhere, they’re made of a kind of thick plastic that makes a noise when you crumple them up. It’s not the kind of object that jumps out at you and says, I want to be a musical instrument. You have to have a certain strategy to get something out of it. My first idea was to fill them with helium because I thought it would be great to have them up to the ceiling of a concert hall during our performances, like balloons. But it couldn’t work. Then we filled them with these Styrofoam pieces that we use for the postal parcels, except that not everybody in the band liked it because we’ve already used this kind of material, so we decided to fill them with cloth and put a microphone inside… and it was perfect!

“There are no good or bad sounds. All sounds are okay,
it’s the context that’s important.”

“It creates an impressive bass sound, very loud, and hitting the outside of the bag with a stick almost sounds like you’re playing on a drum set. Then we came up with another idea: solo bags! For the song ‘Taschen’, we filled the bags with small containers in which we put coins, nails, noodles and peas, and then handled them as if they were maracas. We used that on the rhythms of machines I’d recorded on a construction site in China a few years ago. To this, Rudolf (Moser) added some of his gamelan made from small pieces of metal. That’s when I realised we had something, and it inspired me to write the lyrics for ‘Taschen‘. It’s for this song that I wrote the last lyrics of the record. I woke up in the middle of the night with the words, wältz die Wogen (“roll the waves”) in my head, and I thought it was a strange sentence in German, so I googled to see if anyone had ever written it and I came across Friedrich Nietzsche. So I figured, if Nietzsche wrote it, I can, too,” Bargeld says.

“What it illustrates is that there are no good or bad sounds. All sounds are okay, it’s the context that’s important. If the use of these percussion bags, gamelan, and solo bags helped me find lyrics for a song, it’s because the sounds make sense.”