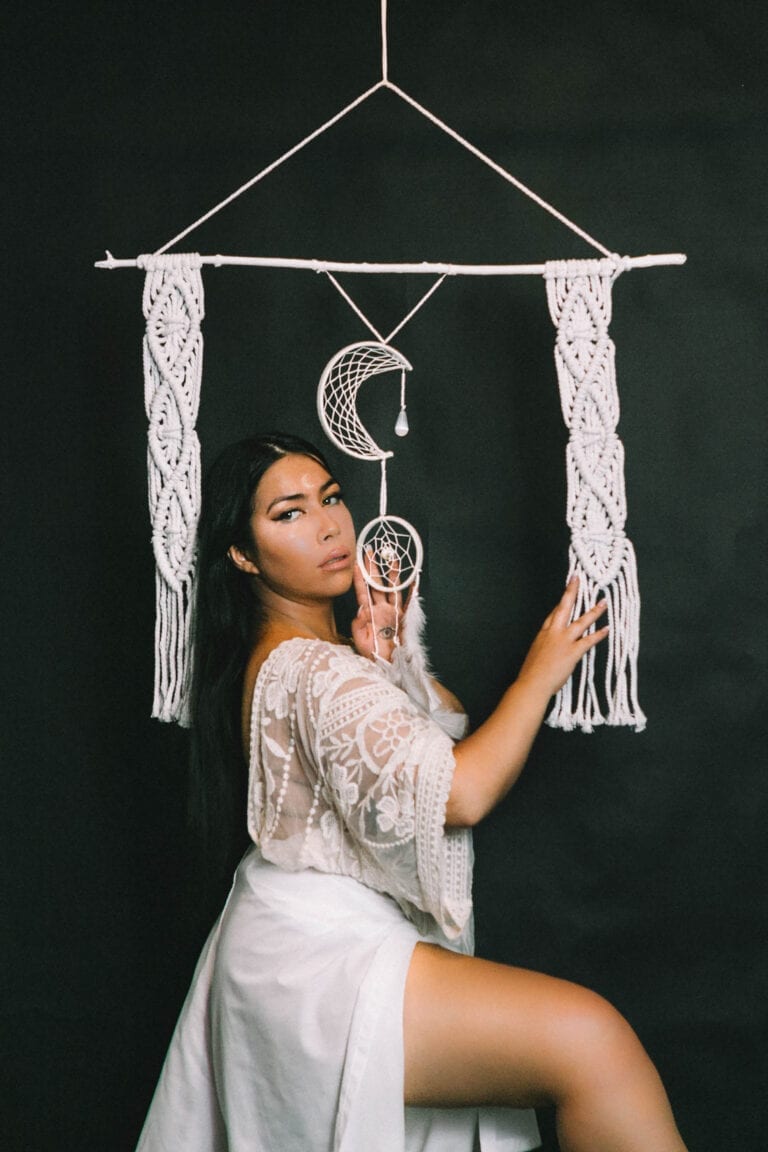 Anachnid: The spider that fell from the sky

Anachnid, an artist of Oji-Cree and Mi’kmaq origins, presents her album Dreamweaver, a powerful backdrop to current political issues affecting Indigenous communities, during her visit to the FME.

Based in Montreal, Anachnid is a hunter from the Far North as well as a city dweller in the South. Released last February, her album Dreamweaver reconciles these two worlds: one is more spiritual, linked to nature and the traditions of her ancestors, the other is more urban, punctuated by the nightlife of downtown Montreal. Each piece makes us discover a part of the web that the artist has woven from her animal spirit, the spider. Delicate, protective but biting and venomous at the same time, Anahnid reveals a little more of her personality in preparation for her concert at the FME festival this Saturday.

PAN M 360: The concert venue for your appearance at the FME is kept secret – what can we expect?

Anachnid: In my culture, pow wows were secret places too, because we weren’t allowed to dance or have rituals, so for me it’s a little bit of a reminder of the past, of my ancestors. Anachnid is very minimalist, but I always do a small performance, like I wear black clothes. At other times, I have little horns from deer that my godfather and my father hunted together. I always have a cultural element that I bring with me. Sometimes drums, a small flute, it depends on how I feel the energy of each event. I have a band now too. I played with them for the first time in Quebec City, one is on guitar and drum, the other on the keyboard for the samples, it’s really interesting as a vibe.

PAN M 360: Your totem animal is the spider. I would be curious to know more, how did it come to you?

Anachnid: It’s always an elder who gives the animal spirit to someone. I was still a difficult, complicated teenager. It helps the parent to know the child’s totem pole. It was an elder who gave me the spider. The spider protects children from evil spirits. I lived with a lot of nightmares, so I learned to make dreamcatchers to protect myself. For it to really work, you have to make your own dreamcatcher, because it is your own energy. A dreamcatcher is actually a spider’s web that protects people from their bad dreams. At dawn, when you see water on the spider’s web, that’s when the dream is purified. That’s why we put little marbles in the dream catchers, to represent the water and the elements of the earth.

Anachnid: When a spider breaks a leg, it grows back. I fractured my left foot, so I made my album in a wheelchair. I had like four legs, I was half machine, half human, it was weird. I fell into a bit of a psychosis because I couldn’t walk. That’s how I made my album, with all the pain, the vulnerability of depending on others. I really felt like a spider. I realized that when you are in psychosis, 75 percent of your thoughts are not true. So you stay calm like that (laughs). It’s a phase of my life that I’m glad I’m not living anymore. I got all the pain out, so being in my 40s was almost a game for me, to stay inside. I learned to love myself in my forties too, to rebuild my nest. There is a pandemic every hundred years, you just have to look at the instructions of the past, how they survived. It’s knowledge that helps us through unstable periods.

PAN M 360: The traditional Indigenous references contrast a lot with the more modern electro and trap sounds you use.

Anachnid: It’s a little wink, in Indigenous culture there are trap lines, to catch game. I draw parallels, the album is really a spider’s web. There are little First Nations references in it. It encompasses the web, like a dream catcher. You need something concrete to hold the web. My web is made of something spiritual, then around it, it’s the machine, it’s metal. You have water, a metal wire, then it creates electricity. With electricity you can create sound, with sound you can create music. These are parallels with nature.

PAN M 360: Your album has been selected for the short list of the Polaris Prize. Also in the running is Backxwash, who’s also playing at the FME.

Anachnid: Yes, I’m in contact with her. I really like her music. When I listen to it, I feel like there’s a side of me that mirrors this tribal, bloody energy.

Anachnid: It’s the first song I did, it was recognized by the national Indigenous Songwriter of the Year Award. I was still happy, because a lot of my family members didn’t approve of my anger. But it was an expression of a frequency that I shared. My drinking was affecting my friends around me a lot, it was affecting me too. I still had that side of my ancestors that prevented me from “fully letting go”. It’s a little bit about that, about consumption, capitalism. Yes, I drink and then I smoke, it doesn’t mean that the indigenous people should be stereotyped because I drink and smoke (she sings the “Windigo” refrain). It’s the capitalist system that programmed me to stay there as a minority, to consume and then not flourish.

They put us in a corner, in a reserve, literally. Reserves protect our identity, but they are also a poisoned gift. I think there are 52 indigenous communities that lack water. I think it’s really appalling. With the pipelines, it’s like shooting yourself in the foot. There is a lot of sex-work trafficking, indigenous women often disappearring. People say it’s to protect the land and water, but it’s also to protect women. There really is a problem in the system. Canada is much darker, like “Windigo”, than you think. There is an injustice.