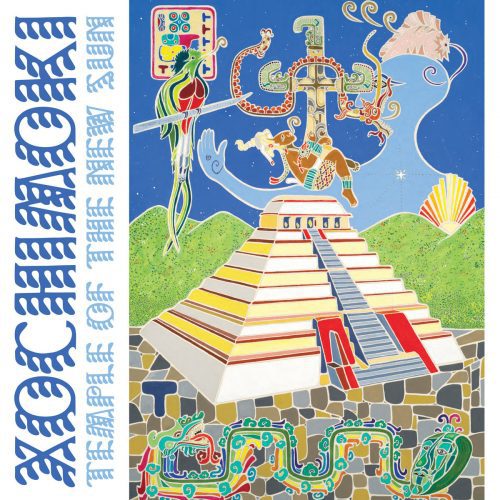 The audio archaeology of this lost-and-found-again reissue is in the second degree. The contents are cultivated from a pair of cassettes from the mid-’80s which never made it far beyond the shelves of a few shops in the American Southwest. The recordings by ethnomusicologist Jim Berenholz and Aztec tradition-keeper Mazatl Galindo, often ritualized exercises at sacred sites, were themselves an exhumation of Mesoamerican memories, scraps of precolonial folklore sewn together with threads of conjecture and imagination. Flutes and drums were involved, as were throat-singing (“Tlakayotl”), field recordings, fabricated birdsong (the ornithological afterword “Tlahuizkalli”) and interesting vocal harmonies in Galindo’s ancestral Nahuatl and other languages of the region (the solar greeting “Tua Ra”). While Xochimoki would fit the phrase “museum music” more than most—the duo went on to soundtrack the Albuquerque Museum’s touring Mayan exhibition—there’s nothing too precious or earnest about Temple of the New Sun, which is also frankly too capricious and curious to qualify as low-stimulus meditation material. It’s full of fascinating, even foreboding moments, sure to entice fans of Popol Vuh and also Philip Glass’ operatic efforts (take note of “Zan Totemikuiko”).