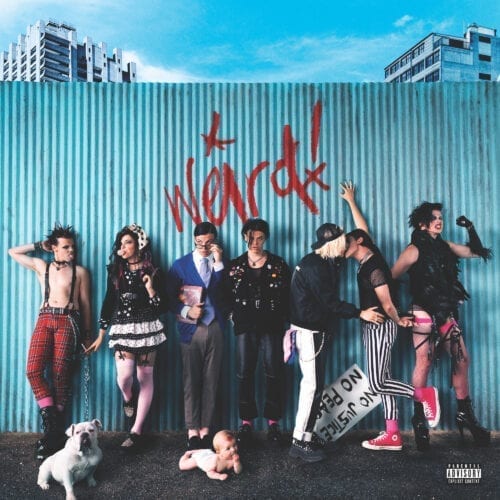 What does it mean to be weird? “To embrace the strange and celebrate the unknown,” answers British musician and singer Yungblud. Weird! tells a story of coming of age, self-acceptance and liberation, especially in terms of sex and gender. The joys of discovery and diverse explorations, as well as heartbreak, anxiety, and complex relationships in the digital age, are recurring themes on the album.

The artist fully displays his belonging to the LGBT community, defining himself as gender fluid, pansexual, and polyamorous. Yungblud confronts heteronormativity and monogamy on “cotton candy”, a joyful hymn of sexual liberation. He was also inspired by the story of a transgender woman he met during a show for the song “mars”. “And I won’t let my insecurities define who I am, I am” – this phrase from “god save me, but don’t drown me out” sums up this empathic activist who draws the outlines of a future that is already more open, that the younger generation (and the not so young!) can begin to experience.

what does it mean to be weird!? finally, it all begins thursday. it’s here. ill see you there. are u ready? 🖤🧷🖤

Since the inventive 21st Century Liability, which prompted a stratospheric ascent in 2018, he also released an EP in 2019, Hope for the underrated youth. If he worked then with rock, pop-punk, ska, and hip-hop, He’s moving away from the hip-hop lately, except on “acting like that” (with Machine Gun Kelly), and touches on Brit-pop. Some songs are rooted in the rock and industrial style typical of the ’90s, like Rage Against the Machine or Prodigy, as on “super dead friends” or “ice cream man”.

It’s still an album cut into 12 slightly uneven slices, often oscillating between ballads and high-voltage jams. But there’s no lack of diversity in every bite of this treat. Ready to poke your dessert fork into Weird!?