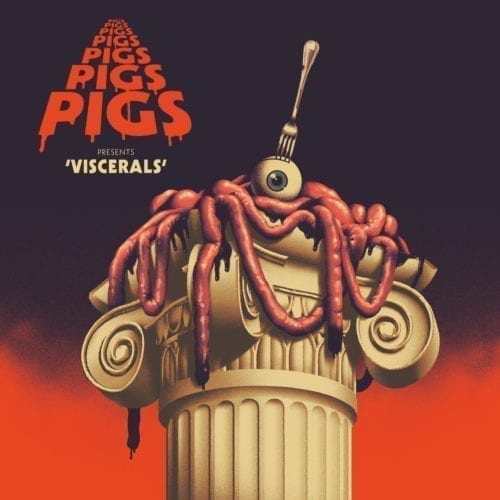 The smell of flesh pervades. Come on, these ruddy Pigs Pigs Pigs Pigs Pigs Pigs Pigs Pigs Pigs (we want to be rigorous, out of politeness) clearly push the sledge-metal cursor further than on their previous album, King of Cowards. The riffs are like butchers, they shear, cut through the fat, the bacon, no matter what, the guitars go to the guts. It’s not for nothing that the album is called Viscerals. These good ol’ Geordies from Newcastle upon Tyne have above all simplified the deal by radically refocusing their compositions to obtain new strengths in the strings and drums.

However, just like Halloween Bolson, Adam Ian Sykes and Sam Grant modestly try new things: they take a shot at prog-metal without ever falling into the noise trap that might have stunted the efficiency of Viscerals. The melodies are heady, as in “Crazy in Blood”; Christopher Morley’s percussion redoubles its intensity on “On Reducer”, punctuated by Baty’s fulgurating vocals over Michael Hedley’s bass. Sometimes epic, often infernal, Viscerals pays tribute to the dark and spectacular ages of Black Sabbath, as on “World Crust”. Sometimes the album tends to be a little more in tune with the style of the thugs of Sunn O))), without a whiff of the new inspirations in the metal genre. Viscerals is an efficient album, but it tends to go round in circles after several listenings. It’s a pity, because the members of Pigs Pigs Pigs Pigs Pigs have talent. However, Viscerals is still an album that strings you up like a leg of lamb, wrapped and weighed.