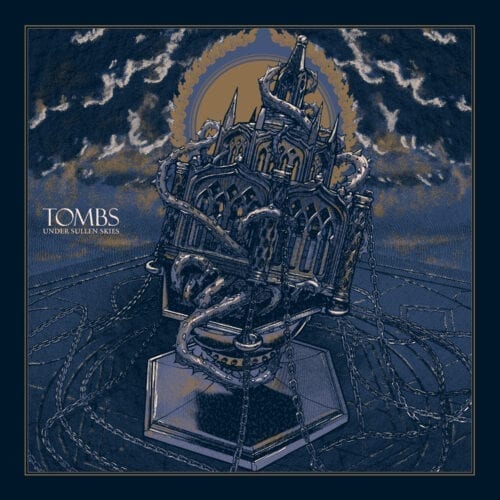 Not content to have charmed many ears with the mini-album Monarchy of Shadows in February 2020, Tombs add 60 minutes of music to their already well-stocked discography. Since forming in 2007, the Brooklyn-based band has released five records (including Under Sullen Skies), four EPs, two split EPs and Abraxas Ritual: Live in Chicago (released April 13, 2020). No small feat when you consider all the occupations of founder, singer, and guitarist Mike Hill, also of  Vasilek and ex-Anodyne, formerly of King Generator and Versoma. In addition to shepherding Tombs’ destiny, Hill is, among other things, CEO and master roaster of Savage Gold Coffee, host and producer of Metal Matters (a podcast broadcast on Gimme Radio), creator and co-host of the Necromaniacs podcast (devoted to the world of horror) and freelance journalist for Noisey, Revolver, Bandcamp Daily and Decibel. Does he sleep?

Listening to Monarchy of Shadows and Under Sullen Skies in succession, it’s immediately apparent that the EP was more focused on the death-metal influence of Incantation, while the album leans more towards black metal and doom, with gothic atmospheres that translate Mike Hill’s love for Sisters of Mercy and Fields of Nephilim.

In the release that accompanies Under Sullen Skies, Hill says he stepped out of his comfort zone by encouraging guitarist Matt Medeiros, bassist Drew Murphy, and drummer Justin Spaeth, all of whom joined Tombs in 2018, to help compose the songs. The result is an album of great richness. There are also some very catchy tracks, including “Bone Furnace”, “Void Constellation”, “Descensum” and “The Hunger”, a veritable tribute to Motörhead’s Lemmy Kilmister, thanks to the contribution of the guest singer, Dwid Hellion of Integrity. Several other artists collaborated on the album, including singer Paul Delaney (Black Anvil) on “Angel of Darkness”, guitarist Todd Stern (Psycroptic) on “Mordum” and guitarist Andy Thomas (Black Crown Initiate) on “Void Constellation”.