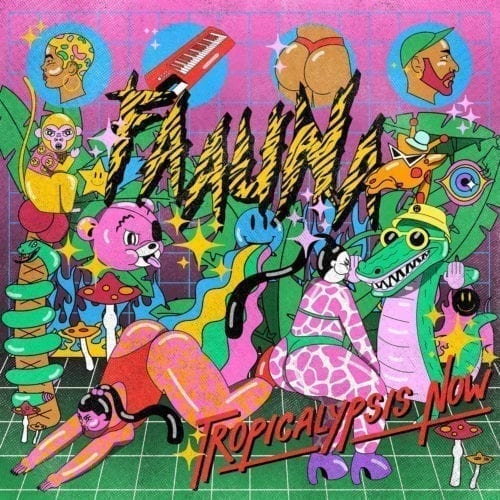 Faauna was a name in the digital cumbia game from the word go, starting in 2003 and connecting early on with the Zizek/ZZK scene of their fellow Argentines – originally as Fauna, adding an A along the way, as membership configurations came and went. The constant throughout has been founder Cristian Del Negro, alias Color Kit, who clearly hasn’t begun to exhaust the party-starting potential of a sturdy, hook-equipped cumbia jam, injecting his productions with other flavours of tropical bass as well.

The big change on this first release since the 2017 single “La Ruleta” is Estefi Spark side by side with Del Negro. Having served as a stage dancer for Faauna for the last decade, Ms. Spark is clearly comfortable fronting the duo as primary vocalist (several guest vocalists drop in, and several outside producers provide bonus beats). When they hit their groove, as on “Astronautas”, the starchy “Papa Camote Y Yuca” with Sol Pereya, or the highly caffeinated “Rompete”, Faauna bang out quirky but undeniably sexy and danceable electro-pop par excellence, as lurid and delicious as the over-the-top artwork implies.

The real test is when the tempo and intensity are dialed down a bit. “Se divisa” starts to drag soon enough, but then there’s the potent “Sambalando” with Martin Biderman, an unhurried song one can settle into quite nicely.