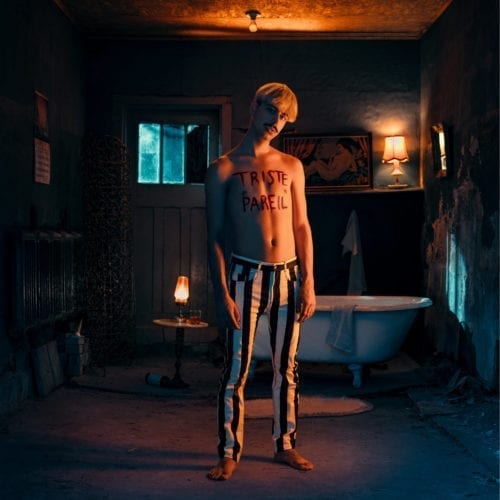 On a chilly evening last February, Gab Bouchard, a determined young 20-year-old, gave birth to the album Triste pareil. Rushing through the tracks on the album, you think first of the dark, depressing night (“L’hiver se meurt”, “Yé passé où l’soleil?”, “La vie c’t’une peine d’amour”, “Tête vide”, “C’est triste pareil”), then of Fernand Gignac (“Une valse pour toi”, “Roses”). One can tell that, for a rather green singer-songwriter, Gab is damn good at it. What’s more, he seems to be in good spirits, so we’re reassured.

You don’t expect much from a young lyricist. As long as he moves you a little, makes you smile, imprints at least one or two verses on your cortex, you’re satisfied. But Gab Bouchard passes each of these tests with flying colours; as proof, after a few listens, the words, “J’pense qu’le bonheur se câlisse de moi – Se câlisse de toi” persist in our memory like a bitter leitmotiv. “Yé passé” contain a key clue to Gab Bouchard’s ancestry: when he sings, “C’est pas des p’tits menés”, we think of Gros Mené and another Bouchard, Pierre, a drummer in his own right, sideman to Fred Fortin and Olivier Langevin, and Gab’s father.

It is Langevin, in fact, who produced the album. It sounds solid, all the more so as Gab’s compositions stand out. We’re not swimming in molten metal à la Gros Mené here, but in a soup that’s just consistent enough, with a very North American flavour. Well, there are a few eruptions (to use Eddie Van Halen’s jargon) on the guitar at the end of “Une valse pour toi” – seems Langevin couldn’t help but have a bit of fun with his pedals. The ubiquitous François Lafontaine manages the keyboards and Victor Tremblay-Desrosiers (half of the amazing duo Valery Vaughn), the drums.

Come on, don’t cheer up too much, Gab Bouchard.