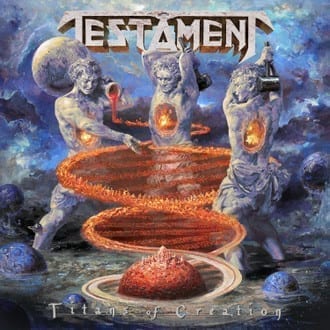 There’s a great time to be had with the Californian band’s 13th album, but overall, Titans of Creation lacks consistency, stalling a few times during the listen. It’s a shame, since the record arrives like a lion with “Children of the Next Level”, which highlights Testament’s talent for creating songs full of galloping melodies and invigorating solos that make you want to wave your fist in the air, or run through a field. Moments like these can be found at the beginning and the end of Titans of Creation. They are interspersed with “City of Angels”, “Ishtar’s Gate” and “Symptoms”, slower-tempo songs that fall flat after the driving vigour of the first four. Titans of Creation regains its momentum with “False Prophet” and reaches its apogee with “Code of Hammurabi” and “Curse of Osiris”. The latter includes the black-metal vocals of guitarist Eric Peterson, the founder of Testament, who is also guitarist and singer of the symphonic black thrash band Dragonlord. The inclusion of black-metal vocals reminds us that Testament is still capable of surprising us, even after a 37-year career.