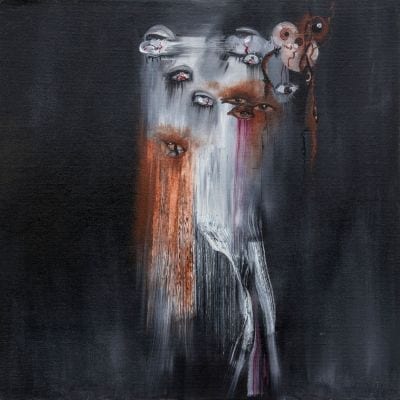 Disappearance. That of the being who, little by little, disintegrates into nothingness. For Dana Schechter, it’s a recurring vision. In the interviews she gave as part of the promotion for the new album of her project Insect Ark, she admits that this feeling haunts her more and more: she sees herself disappearing. With the pandemic we’re going through right now, this idea is even more chilling.

The music on The Vanishing, Insect Ark’s third album, is just as terrifying. The bass, played by Schechter, is relentlessly heavy. The drum beats that Andy Patterson – the new half of the duo – unleashes are incisive. Waves of lap-steel guitars, also played by Schechter, break on the foundations laid by the rhythm section and risk taking everything away. Some electronic sounds also populate this nightmare and give it an even more icy aspect.

The Vanishing is an extremely well crafted album. It must be said that before recording it, the duo played the material several times as the support act for Oranssi Pazuzu. While the tracks that make up the first half of the album are well anchored in rich soil, those of the second half are more hovering. Halfway through, our feet leave the ground and we take off, even though the clouds around us are stormy. During the long title track that closes the album, we feel the storm raging below. The whole ends in a final explosion, then gives way to silence.