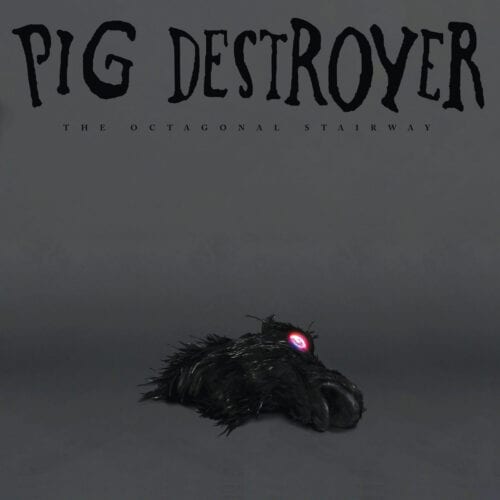 Guitarist Scott Hull and his band are better known and appreciated for their virulent grindcore than for their sound experiments, and that’s what they offer us on their 26-minute EP. Apart from some noise and industrial sounds, The “Octogonal Stairway”, “The Cavalry” and “Cameraman” are the typical Pig Destroyer: a barrage of chunky riffs and furious drumming accompanied by J.R. Hayes’ borborygmus. From “News Channel 6”, on which the singer recites the an apocalyptic news bulletin in a robotic voice (“New Orleans is underwater / Los Angeles is on fire / New York is under attack / Be ashamed that everything that ever happened is your fault”), we’re in experimental and drone territory. The incursion recalls the Natasha EP (2008) and has a tribal and introspective side that represents the adventurous dimension of Pig Destroyer well. The Octogonal Stairway meets expectations, while leaving us with an appetite.

Readers of Decibel magazine will have noticed that the song “The Cavalry”, named for the participation of drummer Igor Cavalera (ex-Sepultura, Cavalera Conspiracy), was released in February 2019 in flexi-disc format.