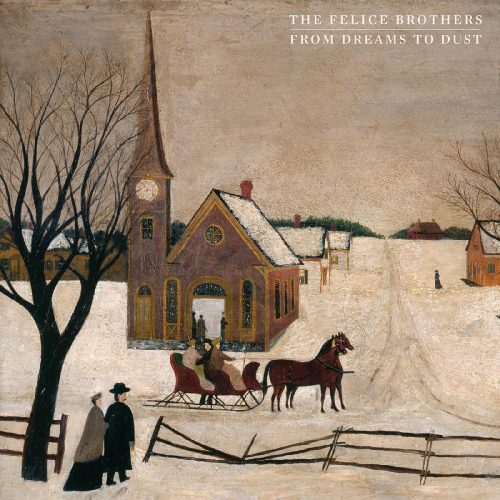 A hardy brotherhood they are, the Felice Brothers. Probably the worthiest ambassadors of the folk-rock current I would call “Catskills Gothic”. The fact that they are its sole ambassadors should not diminish their merit. Also, the Felice Brothers are not to be confused with their fellow practitioners of Americana the Pernice Brothers, who hail from Massachusetts. The quartet is composed of siblings Ian and James Felice, the former occupying the guitar and lead singing duties, the latter a multi-instrumentalist and backup singer, as well as musical sister and brother at heart Jesske Hume on bass and Will Lawrence on drums. Two musicians from the band Bright Eyes are guesting, renowned guitarist Mike Mogis on pedal steel as well as trumpet player Nathaniel Walcott, who executes the tasty score we hear on “Jazz on the Autobahn”.

From Dreams to Dust, the group’s eighth opus, was recorded in Harlemville, NY, in a 19th-century church Ian Felice renovated. What slips into the listener’s aural tract are well-oiled folk-rock melodies and rhythms, grade-A Americana with the perfect balance between rugged and delicate. Lyrically, the brothers Felice stand among the best of their generation. Granpa Zimmy makes his inextinguishable influence known, especially on “To-Do List” and “Celebrity X”, both songs built according to the rules laid out by Dylan on Desolation Row. Dylan took his inspiration from Fellini’s Great Circus, while the Felices found theirs in Dylan’s Court of Miracles. Influences are transmitted and transmuting.

To alternate between the comic and the tragic, the Felices garnish their lyrics with well-chosen cultural allusions. Thus, on “Inferno”, we hear, “Who’s that riding on the banks of the Rio Grande – It’s Jean-Claude Van Damme,” then, “Who’s that singing in the land of the falling rain – I think it’s Kurt Cobain.” “We Shall Live Again” is a song of hope that largely recalls the aforementioned Mr. Zimmerman’s “I Shall Be Released”. Since 2021 isn’t 1968, however, and that today’s hope isn’t what it used to be back then, the Felices covered their song with bittersweet sauce, as shown in the excerpts “Remember Hegel, that beautiful son of a bitch,” “Marcel Proust, you thought he ruled the roost” or my favourite, “From Francis of Assisi – to the fans of AC/DC – We shall live again.” On “Be at Rest”, a eulogy as wacky as it is touching, the deceased hero was stuck for two months in a painting by Bruegel the Elder. The painting on the album sleeve is not from the Flemish master, its author is unknown and it is called “Winter Sunday In Norway Maine”. I’d like to be stuck in it for a few hours, listening to From Dreams to Dust.