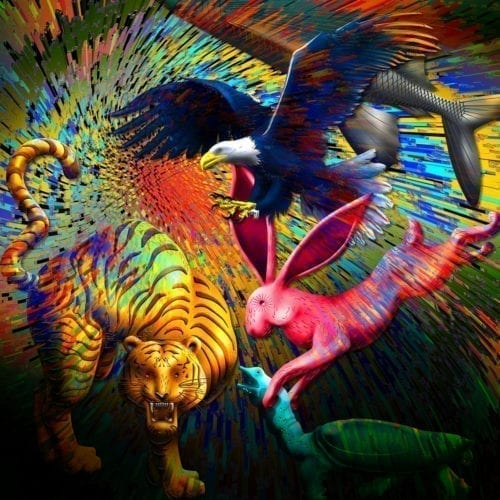 Considered an intangible treasure of Korean national history, pansori is the centuries-old tradition of epic storytelling performance, one of exaggerated sprechgesang, ritualized gestures, and sparse drum accompaniment. Of the five canon works still performed today, the allegorical beast fable Sugungga is the lightest and most irreverent. Its tale of a dying Dragon King, a dutiful turtle, and a duplicitous rabbit reflects the plebian roots of the artform.

Though they’re named after a Joseon-era master of the craft, Seoul’s LeeNalchi aren’t preservationists overly precious about the past. Numerous modern Korean artists have sought to reboot pansori in recent years by fusing it with rap, jazz, and of course K-pop; LeeNalchi set off their vocal fireworks against an instrumental backdrop informed by post-punk, new wave, krautrock, and space disco, with kosmische synths and two bass guitars (two, that’s good, I like that). It’s a concept that could have come from the conclusion of rigorous cultural research, or the bottom of a bottle of soju. Either way, it’s astoundingly successful, as the eccentric art-funk of opener “Tiger is Coming” makes immediately clear.

Sometimes haunting (“You Know Who I Am?”), often hilarious (“Tiger’s Third Leg”), always highly expressive, LeeNalchi’s radical arrangements for voice, and the inspired deliveries of the band’s five sorriggun (traditional singers), turn pansori’s rather startling characteristics, something of an acquired taste, to their advantage. The results captured here amount to one of the most impressive episodes of collective vocal music-making this reviewer has heard in years. Most importantly, it’s incredibly fun, and catchy enough to ensnare even the sneakiest trickster bunny.