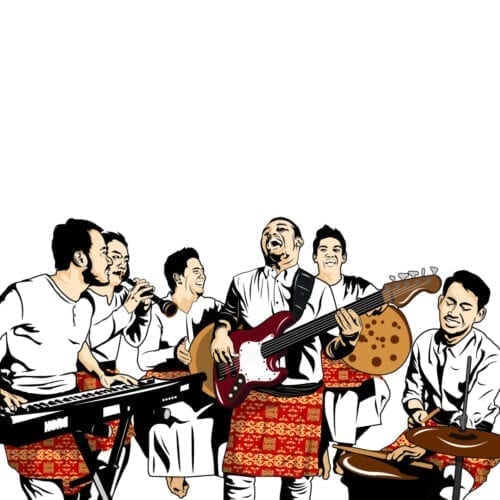 Aceh (pronounced ah-chay) is the name of the Indonesian province on the northern tip of the island of Sumatra. With 2,000 mm of rainfall per year, it’s hot and humid, with a temperature of over 30°C. Under such conditions, one might be tempted to believe that the music of this Acehnese group is as torpid as, say, Jamaican reggae or bossa nova carioca. This is not the case. Not only is it a rather exuberant and upbeat genre, but even the pieces that start slowly invariably begin to accelerate the tempo after a few bars. Changes of tone are also frequent.

Keubitbit, which in Indonesian means “heartily”, is a band that’s been around since 2014, and Stories of Aceh is actually a compilation of their best tracks so far. Although its instrumentation is relatively conventional – in addition to its two players of the serune kalee and rapa’i (traditional Acehnese flute and drum), it includes piano, synthesizer, alto sax, guitar, electric bass, drums and occasionally sung interventions – Keubitbit’s music is as surprising as it is difficult to pin down. First of all because of the rather abundant use of electronic sounds, and other sounds associated with jazz fusion straight out of the ’70s, but also because it often reminds us of the traditional music of the Balkans… Not to mention some prog elements. Some moments even evoke the Brazilian Milton Nascimento. But all of them have in common a joyfulness, with equally enthusiastic solos, never forced. Ideal for facing the summer’s heat waves with aplomb.