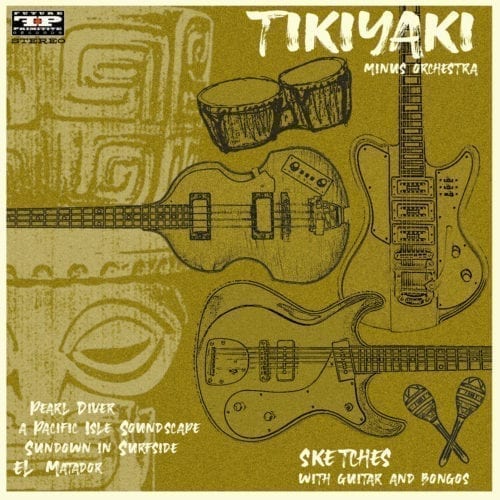 No man is an island, not even a man in an aloha shirt, clutching a mai tai. On the other hand, lonesome castaways can be surprisingly creative… Jim Bacchi is the bandleader of Los Angeles sextet Tikiyaki Orchestra, who pretty comprehensively chart the territory between Martin Denny, Morricone, Esquivel and The Ventures. For the moment, however, the law says no luaus, so it’s no-go for their connoisseur kitsch. Alone in his lair with only grimacing tiki mugs for company, Bacchi grabbed some bongos, noisemakers, and guitars (including an Eastwood baritone – listen for it!), and cobbled together this EP. Since its revival in the ’90s c/o Combustible Edison, countless acts have worked the retro lounge/exotica style, so it takes a lot of talent to create something that sounds fresh in the field. Bacchi has done so, and with limited resources. The cavernously atmospheric “A Pacific Isle Soundscape”, for instance, conjures up a vivid acoustic sense of space and furnishes it with strange and beguiling sounds.