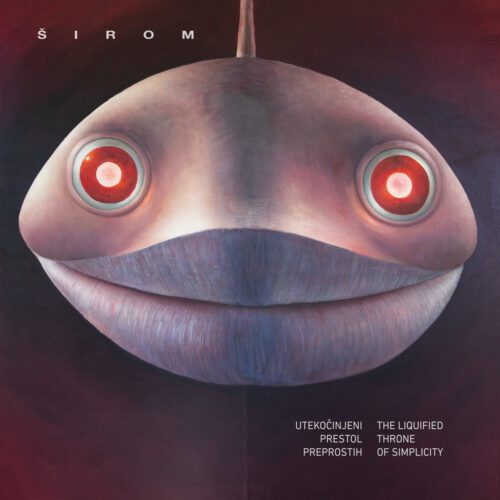 For the record, Širom was born from a triangulation: Ana Kravanja and Samo Kutin were already forming a kalimba duo when Iztok Koren, not yet knowing that he would be the third angle of the trio, showed up at a balafon workshop. They jammed a bit and offered to play together again. That was in 2015. As of now, these three Slovenian multi-instrumentalists, who are taking part in a slew of other projects, have so far created four albums. I was released in 2016, followed by three more with baffling titles: I Can Be a Clay Snapper (2017), A Universe That Roasts Blossoms for a Horse (2019) and, most recently, The Liquified Throne of Simplicity (Utekočinjeni prestol preprostih in Slovenian).

Širom’s music is special in that it seems to come from an immemorial tradition, while it rather gathers a bunch of influences and emanates, above all, from the imagination of Ana, Iztok and Samo. All three were born in Slovenia, an independent republic since 1991 after having been under Roman, Byzantine, Carolingian, Roman-Germanic, Hungarian, Venetian, Illyrian-French, Austrian, Austro-Hungarian and Yugoslavian domination. The three free souls of Širom never cease to flourish in this small mountainous country, for their instrumental curiosity is insatiable. Between the three of them, they play the viola, hurdy-gurdy, ocarina, tempura brač (a kind of truncated Balkan guitar-mandolin), banjo, lyre, lute, guembri (a three-stringed lute characteristic of Moroccan “Gnaoua” music), mizmar (a double-reed oboe from the Middle East), as well as a plethora of percussion instruments and handmade instruments or objects from which they extract music.

It is hardly surprising that the five songs of The Liquified Throne of Simplicity are powerfully evocative, disorienting and bewitching; nor that Širom recently gave concerts in villages, pastures and even an old stable. The medieval post-rock “Wilted Superstition Engaged in Copulation” goes on for twenty minutes, like a run on the edge of a cliff. “Grazes, Wrinkles, Drifts into Sleep” is a 16-minute journey to Lord knows where, perhaps to a vaguely oriental land. The dissonant “A Bluish Flickering” could be the soundtrack to a holiday in a cave. During the 18 minutes and 43 seconds of “Prods the Fire with a Bone, Rolls over with a Snake,” the voices of Ana and Samo remind us of what our distant ancestors must have felt a few millennia ago, huddled around flickering campfires in unknown lands. Then Širom greets us farewell with the short “I Unveil a Peppercorn to See It Vanish,” a Balkan bluegrass tune that will haunt the humble traveler and music lover.