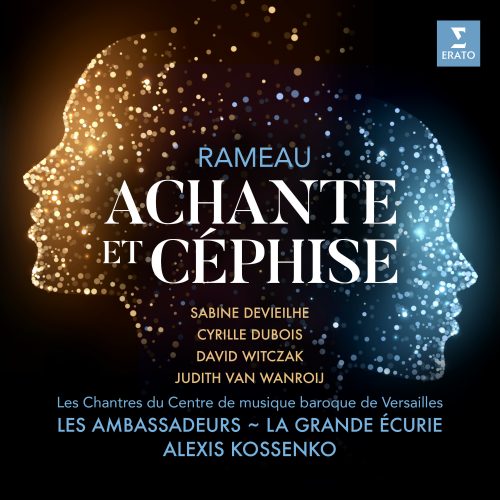 An almost total silence of 270 years has just been spectacularly broken with this dazzling recording of Jean-Philippe Rameau’s Achante et Céphise, an opera (or rather a “pastorale héroïque”, as it was then called) played 14 times, then returned to the shelves of music libraries. Not because of a lack of quality (obvious to anyone who listens to it), but because of a combination of circumstances that I will discuss later.

No, almost three centuries spent in the oblivion of history have not altered the magnificence and intelligence of this “private” composition by Rameau—that is to say that it was commissioned by a wealthy bourgeois who wanted to dedicate it to the birth of a little royal prince, the future Duke of Burgundy (of whom no one cares any more nowadays). This ”private” character (not officially endorsed by the State and the Royalty), as well as the finale which sings the glory of the monarchy (the Revolution soon afterward changed the priorities, so to speak!), probably explain the fact that we ”lost” the key of the locker where the score was stored during all this time.

If Rameau fulfilled his obligation to dedicate the work to the birth of some nobleman, he did so as such: inserted at the very end of the work, as an oversight caught in extremis and obviously pasted artificially. Fortunately, understanding the necessities of the time, we forgive him easily, especially since the whole opera is a treat for the ears.

It starts off with a spectacularly ruffled Overture, of a kind unexpected for that time. Evoking cannons, fireworks, and jubilant crowds, it sounds almost like a baroque version of “Mickeymousing”, the hyper-descriptive music used in 20th century Disney or Warner (Bugs Bunny) cartoons.

The rest of the drama, which tells of the tribulations of a young couple (Acanthus and Cephis) threatened by the invasive attentions of an evil spirit (Oroes) for the belle and the help brought to the lovers by a kind fairy (Zirphile), returns to more traditional musical transport, but worthy of the great Rameau in their melodic ease, their emotional characterization, their petulant orchestration and the clever contrasts between delicate temperance, sometimes dreamlike, and exhilarating exuberance. Hats off to Alexis Kossenko for a committed direction that allows him to keep a tight rein on a very large group of musicians from La Grande Écurie and Les Ambassadeurs, with many wind instruments, percussion, and a wind machine. Superb precision of the interventions, biting attacks, expressive dynamic nuances.

Many of the recitatives could put off music lovers more inclined to the pleasure of arias, duets, and choruses, but they are treated with a certain opulence thanks to an accompaniment that involves, in addition to the usual harpsichord, three cellos and double bass.

That said, the stars of this 18th century version of the blockbuster (the staging must have been orgiastic with theatrical special effects!) are the soloists and the chorus. Sabine Devieilhe (Céphise) is excellent; she sings her lines in a tender and determined manner to her brilliant Achante (Cyrille Dubois), whose light tenor full of youth transmits, at the same time, an adequate strength of character. David Witczak plays a dark and menacing Oroès, who obsesses over the beautiful Céphise (in the age of #metoo, here is a character that is as detestable as one could wish), with a baritone of a beautiful and pleasant roundness. Judith van Wanrooij is luminous in her role of Zirphile, a sort of fairy godmother protecting the star couple.

And then, the choirs! I must confess to having a soft spot for the choral passages in baroque operas, particularly in those of Rameau, who knew how to highlight them with irresistibly heroic, even pompous scores (but we don’t care, it is so beautiful!). Their implacable force is rendered here with a splendour that is hard to match by the Chantres of the Centre de musique baroque de Versailles. Luminous (absolutely), grandiloquent (yes, too), but above all, delightful. We love them to death!

Add to this the surgical diction of both soloists and choir, and we have here an event not to be missed.