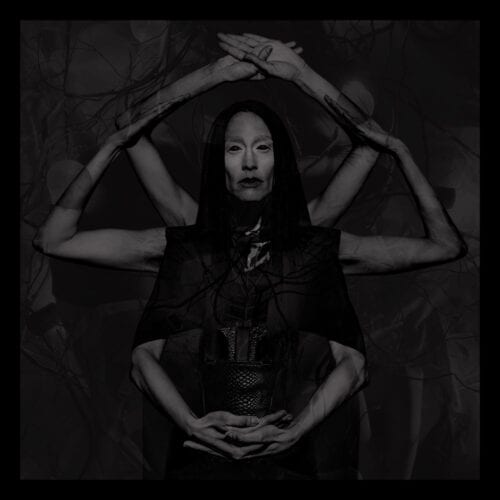 Bestial Mouths, in existence since 2006, have recently restructured around the vibrant presence of Lynette Cerezo. Resurrectedinblack is the first album she has entirely shaped. It follows the EP released last November under the label co-created by Cerezo and Alison Lewis (Zanias/Linea Aspera). If the band, coming from post-punk, has always flirted with experimental and more industrial sounds, Cerezo’s involvement has accelerated these inclinations, to our great pleasure. The album navigates between very catchy, dark tracks exploding in visions worthy of gothic raves, creepy sonic atmospheres, and very promising surprises.

The incessant search for renewed aesthetic incarnations, both sonic and visual, is palpable. This desire to embody sound can be seen and heard – Cerezo’s own voice, thunderous, exaggerated and dramatic, totally contributes to this. Her vocal performances serve as summonings, coiled on lively rhythms or tribal and martial ambiances.

Between very strong and dynamic tracks, such as “Dry as Dust” with its gothic rock sound, and the desolation and dignity of “Industrial Waste”, Cerezo surprises all the more with “(A) Siren Calls”, a little jewel of gothic lament. Her hiccupping, falsely childlike voice unfolds to a much calmer music, supported by ceremonial strings, for a result as singular as it is bewitching.

She sounds like a witch officiating at some ritual whose content escapes us: codified, hermetic, esoteric gestures. But on “In Ruins”, whose video is a superimposition of images from the recent American BLM demonstrations, the priestess neither reinforces nor sublimates reality, rather confronting it in every possible way, creating true chants of war and liberation. An excellent opus, of undeniable aesthetic and emotional power.