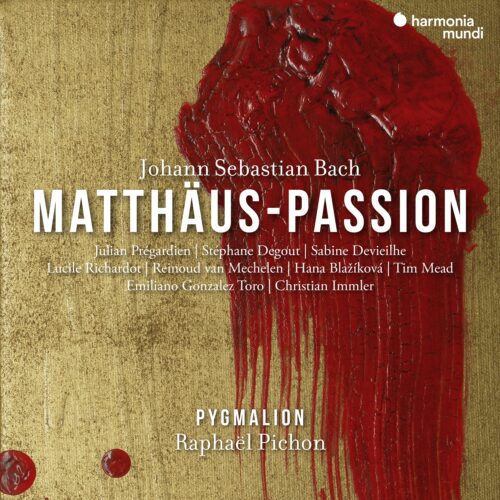 This version of the St Matthew Passion was recorded at the Philharmonie de Paris in April 2021. At the time it was described as admirable, so this release on the Harmonia Mundi label, made under ideal sound conditions, is something of an event.

Raphaël Pichon is a conductor who delves into the text, the music, the context and all the subtleties of a work, from the most obvious to the most intimate, even secret. What he does with this Passion is to balance it admirably, then transcend it, thanks to a vision of the work built on a total understanding of its nature and scope.

Pichon brings to the fore the skilful interplay of time that Bach developed in this almost cinematic fresco. Bach wrote his St Matthew for two orchestras and two choirs in dialogue. On the one hand, there is the Gospel story from two thousand years ago (1700 during Bach’s lifetime), and on the other, the present day story in which real men and women react and comment on the drama. The latter speak in the first person, deepening the integration of the audience in the development of the work. Bach never wrote operas, but with this Passion he created one of the most accomplished dramatic masterpieces of all time.

Pichon also plays a balancing act between the modern trend of urgent and nervous readings and the ultra-slow, dark and tragic versions of another era (Karajan, Klemperer). He takes the time to let the phrases breathe to allow them to reach their expressive and meaningful potential, but he does not let them sink into heavy handedness.

The soloists are excellent, among others Julian Prégardien, Sabine Devieilhe and Stéphane Degout, and are invested with the meaning of the texts and the transcendence of the music.

This Saint Matthew by Pichon and Pygmalion has been a long coming project. The musical director wanted it to be perfect and therefore took his time before daring to record it for posterity. Ten years of preparation were necesary before giving it in concert for the first time in 2016, then another period of maturation completed the journey that has led to this recording of very high quality.