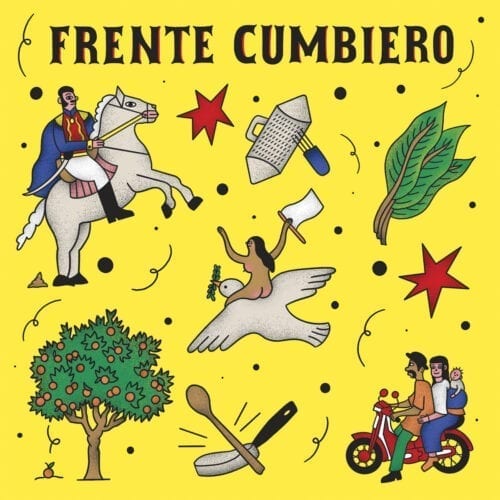 With the dust hardly settled on their team-up EP with Japan’s Minyo Crusaders, Bogotá’s Frente Cumbiero get back to NYCT, the Brooklyn label that put them on the map a decade ago with the sizzling single “Pichito”, and to their primary function – pumping a shot of fresh life, a dash of dub, and a bit of psychedelic shimmer into the classic sounds of cumbia and similar styles from the country’s Caribbean coast. Porro, for instance, on the brisk A-side “Porrovía”, which benefits from a tough brass hook that kind of recalls the one from “Tora Joe”, off Minyo Cumbiero, mentioned above. Bandleader Mario Galeano’s sneaky, snaking synth adds further flavour, and so does Sebastián Rozo’s stout and sturdy bombardino (a smaller cousin of the tuba). The B-side, the vigorous “El Método De La Cera Perdido”, is even busier – percussionist Pedro Ojeda certainly keeps himself occupied – but lighter in its touch, with a pleasing refrain and a nice glow overall.