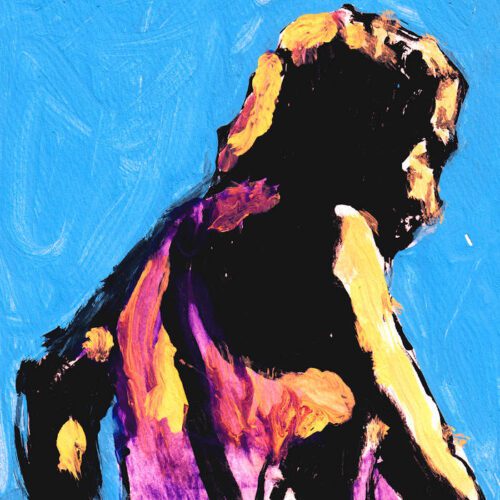 With his whimsical take on neo-psychedelia, there has always been a more punk, garage-rock edge to Paul Jacob’s music. His grand opus LP of last year, Pink Dogs on the Green Grass offered freak folk acoustic guitar mixed with a full band, off-kilter percussion, synth work, and a bit of sinister psych rock n’ roll. It had many layers and standout songs that became crowd favourites during a Paul Jacobs live show. And now Paul is signed to Bonsound, bigger than ever since his early one-man-band and post-punk Pottery days, and just released a follow-up EP, 185 on the Corner.

This EP is undoubtedly Paul Jacobs, but that sinister punk rock edge is almost completely gone on the four EP tracks. Instead, each song feels like a piece of lighter, soft, droney folk that kind of drifts into the next. Save for “The Tree Outside My House,” with its strange, whispering, and vague vocal style, no songs really stand out on their own. This is not to say the EP is an enjoyable listen, but it’s not on par with the hit after hit of Pink Dogs on the Green Grass.

It might be due to the fact that Paul really lays into the studio effects during 185 on the Corner, throwing a multiplier on his voice for a psychedelic effect, but kind of loses the listener in the process. The instrumental hooks—little acoustic guitar lines and synth flutters—that cemented Pink Dogs are not really present or are maybe just muted in the mix on this EP. Simply, listening to 185 on the Corner just made me retreat back to Pink Dogs on the Green Grass.