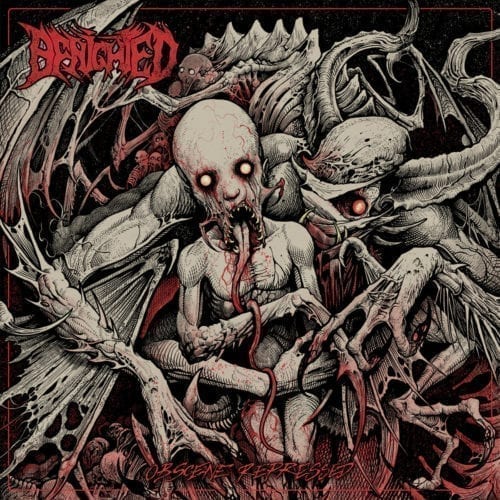 Death metal, grind, carnage and madness are some of the words that come up when talking about the music of the French quintet, and they arise once again when listening to Obscene Repressed. Rather than reinvent their sound, a mix of death metal and grind that is extremely fast, brutal and frenetic, the musicians add spice in the form of guest vocalists. Sebastian Grihm (Cytotoxin) and Karsten Jäger (Disbelief) are at their best on “The Starving Beast” and “Mom, I Love You The Wrong Way”, respectively, while Jamey Jasta (Hatebreed) gives a more hardcore flavour to “Implore the Negative”, the song that stands out the most from the rest. Fans who choose the deluxe version of this ninth album will be treated to a cover of Slipknot’s “Get This”. At the beginning of the song from the “digipak import” version of the 1999 album of the same name, Corey Taylor asks singer Julien Truchan to give him a shout and Truchan responds with one of his famous “pig squeals”. Benighted understood that if you’re going to cover a song, you might as well make it your own.

Each Benighted album includes at least one song in French. There are three on Obscene Repressed, including the title track, “Brutus” and “Undivided Dismemberment”. Madness, horror and bloodshed remain at the heart of Truchan’s lyrics, who drew on his experience as a psychiatric nurse to concoct the story of a psychotic boy with a serious Oedipal problem.