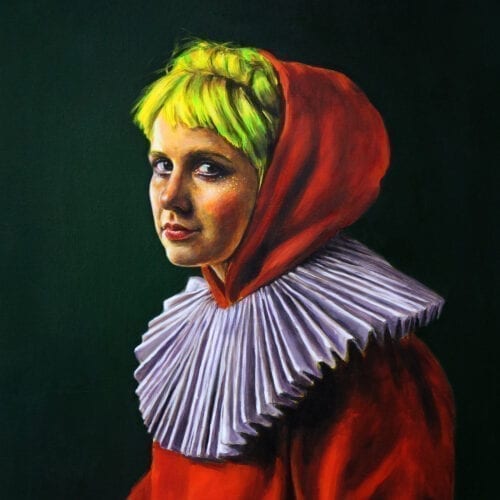 At the end of the second chapter of a career barely begun, psychological distress led Klô Pelgag to difficult introspection into this existence of hers, and which will be hers for a long time to come. Let’s assume so, for she has the necessary talent and the power to deconstruct her art without denying it, to rebuild it, to make it live a lifetime and more. Pelgag knows perfectly well that it’s never a given for anyone: it takes courage to stand up after the slap-downs and all the great uncertainties, to let go, to knock off the navel-gazing, to move forward, to make one’s pain a fuel for creation. Notre-Dame-des-Sept-Douleurs embodies an important transformation in the third chapter: Klô Pelgag becomes the composer, lyricist, arranger, co-producer of her work, moreover orchestra leader, the only mistress on board. She even allows herself ambitious arrangements for chamber pop, a complex task once entrusted to her brother Mathieu, educated and trained in this capacity. Listening carefully to her three albums leads to this observation: harmonically, her arrangements for strings have perhaps not yet acquired the depth, breadth and contemporaneity of those of her first two albums, with a few exceptions – the finale of “La maison jaune”, for example. A superficial listen, rather, leaves the impression of a continuity, which is not exactly the case, but this work presents the seeds of a distinct orchestral discourse, and we exclude here the three more mature arrangements care of Owen Pallett, Polaris prize-winner (under the pseudonym of Final Fantasy) and close collaborator of Arcade Fire. The organization of the sounds for a big band (strings, brass) is a conclusive learning process, the dynamics in a small band differs from what we’ve heard before from Klô Pelgag, here one feels a new force unfolding, an occasionally rock spirit. But what’s most remarkable about this album is in the lyrics and the voice that carries them. The words are organised more simply, the poetic explosions are better highlighted, the author spares no effort and trims for the better. This is certainly an album whose appreciation grows with time.