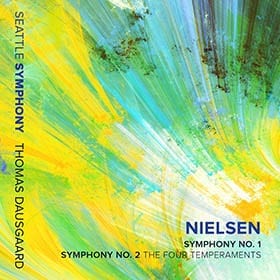 Thomas Dausgaard and the Seattle Symphony continue their exploration of the symphonies of Carl Nielsen (1865-1931) on this second opus in a cycle devoted to the Danish composer. Perhaps less well known than that of his Norwegian and Finnish counterparts Grieg and Sibelius, the work of Nielsen, considered Denmark’s national composer, is nonetheless imbued with his musical heritage: a language that he absorbed intelligently, before reformulating it in an original and personal manner.

Conventional in harmony and musical line, the composer’s first symphonies, proposed by Maestro Dausgaard, a specialist in the Danish repertoire, are marked not by the distinctive use of folk idioms, but of progressive tonality that evolves the musical identity of the work as it unfolds. The first symphony bears the hallmarks of the aesthetics of Brahms and Dvořàk, with a rhythmic and motivational focus reminiscent of Beethoven’s fifth, especially in the first movement. Despite its evocative title, Nielsen refused to describe his second symphony (The Four Temperaments) as programmatic. The moods expressed by the character indications in the movements (Allegro collerico, Allegro comodo e flemmentico, Andante malincolico, and Allegro sanguineo) nevertheless reveal a certain imagery that is not rooted in an excessively sentimental stylistic canon, but on the contrary, expresses a complex range of emotions. This is particularly noticeable in the third, “melancholic” movement, whose aesthetics are marked by sadness, but also by dismay and irritation.

Elegantly directed with sensitivity and energy, the contents of this album offer a beautiful and excellent introduction to the work of Carl Nielsen, whether you are a fan of Scandinavian music or an intrigued music lover.