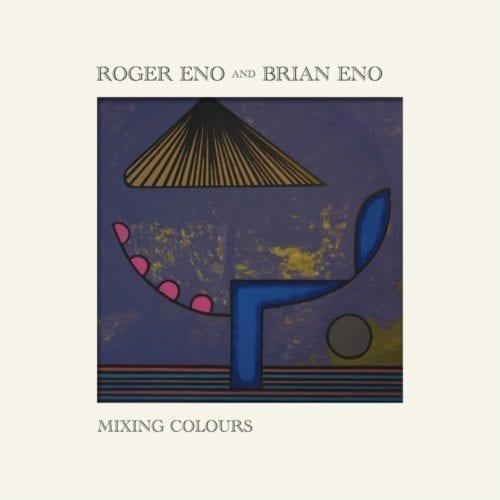 With the exception of Apollo: Atmospheres & Soundtracks, the record they made with Daniel Lanois in 1983, and of the ten tracks (Roger participates in three of them) that were added to its Extended Edition released last year, this, surprisingly, is a rare occurence of the Eno brothers collaborating.

The creation of the 18 pieces of Mixing Colours was spread over a period of 15 years. Every once in a while, Roger would record stuff he improvised on a MIDI keyboard and, when he thought he had something that would interest Brian, he would send him the files so he could fool around with it. Over time, the number of tracks produced by this conversation became large enough for the two brothers to consider making an album out of it.

It’s easy to dismiss this kind of music out of hand, under the pretext that there’s almost nothing going on, especially since these pieces are not only slow, but also rather simple melodically and harmonically. It’s not so much the content here that’s interesting as the form – the melodies are almost incidental. When you listen closely, you can hear how much timbre and colour these miniatures contain. To allow those colours to radiate even more, they are generously swaddled in reverb effects. However, as they are slow – and placid, it should be stressed — it’s necessary to be able to match their frequency by adopting the same rhythm oneself.

They are therefore an excellent means of slowing down the passage of time and giving it a certain volume and lightness, especially when one is reduced, as we are at the moment, to contemplating its passage by looking out the window.