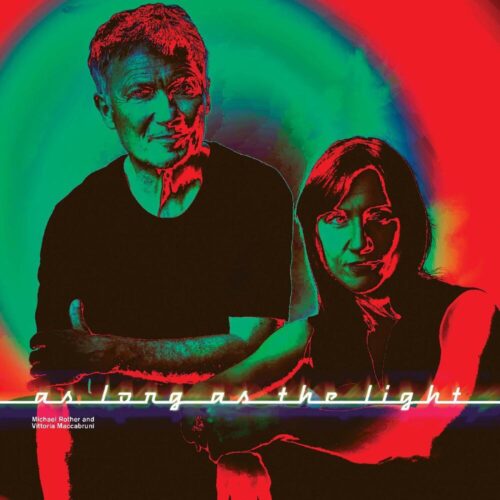 Michael Rother had been living on a farm in Bevern-Forst, Germany, since 1973. It seemed like nothing could draw him away from his little island of peace and quiet in the countryside. Nothing or… almost nothing. Falling under the spell of the electronic experiments that apprentice musician Vittoria Maccabruni, from Italy, shared with him, Rother decided, on a whim, to join his new muse. Thus, he drove to Italy with his favorite instruments. It took him two days. A year and an album later, he now shares his life with Vittoria in Pisa. And fifty years after the release of his original band’s first album, Michael Rother and his new collaborator succeed in making Neu! sounds out of old ones. Vittoria created melodic, aquatic, and organic rhythms and percussion sounds that echo the Indonesian gamelan, while Michael kept his expressionist signature and the characteristic wah-wah effect of his easily identifiable guitar playing. “Curfewed” plunges us headfirst into the famous cosmic tunnel of krautrock and reminds us of the– sometimes unjustified–martial state of mind of our governments in front of the pandemic, in a context where only emotions control the decision-making. Aiming at helping the listener to see more clearly so he can get out of this tunnel, “Codrive Me” describes a moment of interoceptive awareness suspended in time, where what we hear and feel could be heartbeats and waves of breath. This song may very well illustrate the therapeutic function inherent to music, that helps us reconnect to the organic world, and thus better understand the sensory and emotional experiences that arise from it. As if by magic, this first collaborative attempt, created spontaneously by a German and an Italian artist, succeeds in making reviving the peaceful glow of a quiet European force that shines in us and will never be extinguished.