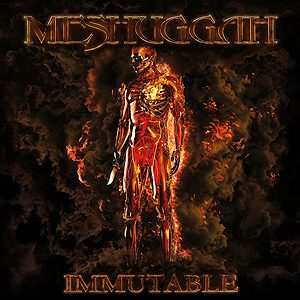 When listening to a Meshuggah album, it’s easy to imagine that the musicians playing these complex and intimidating pieces are “Engineers,” those hairless humanoid giants seen in the movie Prometheus. In real life, it turns out that only one member of the Swedish quintet is bald. And that all of them have that somehow sinister look quite typical of the metal persuasion. Meshuggah titled their ninth album Immutable. This is probably not insignificant since the band follows its inflexible path in a cosmos that it created itself. Meshuggah’s sound, like that of all musical innovators, originally comes from a hybridization. Is it the prog-metal and extreme metal of their co-religionists Cynic and Fear Factory, respectively? This could be debated ad infinitum in a forum of metal geeks. Meshuggah then complexified–in a good way–and refined its music, to such an extent that it continues to stir up emotions, thirty-five years after the band’s foundation. Immutable contains thirteen pieces that total 68 minutes. It is difficult for the music lover not to be in awe of the assembly of rhythmic and polyrhythmic prowess of drummer Tomas Haake–also a lyricist, like his master Neil Peart–, the eight-string guitars of Mårten Hagström and Fredrik Thordendal (who, due to a solo project, did not take part in the writing), the seismic bass of Dick Lövgren and the guttural voice of Jens Kidman. Listen to “The Abysmal Eye,” for instance, to understand how Meshuggah can powerfully tug your vestibulocochlear nerve.