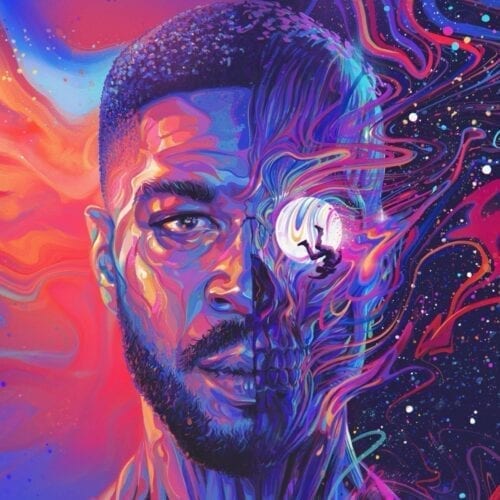 It takes a lot of self-confidence and creativity to design a trilogy of works that’s constant and evolving. With the third and ultimate – at least for the moment – instalment of Man on the Moon, Kid Cudi justifies his fame. Some 11 years have passed since the release of the first chapter of MOTM, which contains the hymns “Pursuit of Happiness” and “Day ’N’ Nite”. There may not be any songs of this calibre on MOTM3, but it is an 18-song epic in which Scott Mescudi delivers heavy lyrics over huge instrumentals. Travis Scott’s influence is evident in his sparing use of Auto-Tune and dynamic improvised passages (yeah!). Cudi does not, however, deny his DNA or trademark, his intoxicating humming, heralding the excellent “Solo Dolo III” and “Tequila Shots”. The Cleveland artist is known for his risk-taking, which has sometimes drawn the wrath of critics. He seems to have learned lessons from the days of Speedin’ Bullet 2 Heaven, that paltry pop-rock album released in 2015. Aside from the clumsy attempt to sample “The House of the Rising Sun” on “Elsie’s Baby Boy (flashback)”, Cudi remains in his safe zone on MOTM3 and we’re happy about that. The guest contributors blend well into the work; Pop Smoke and Skepta add their drill and grime sauce on “Show Out”, while Phoebe Bridgers is natural on “Lovin’ Me”. In mid-December, Kid Cudi releases one of the year’s hip-hop events at the last minute, which any rap fan can enjoy.