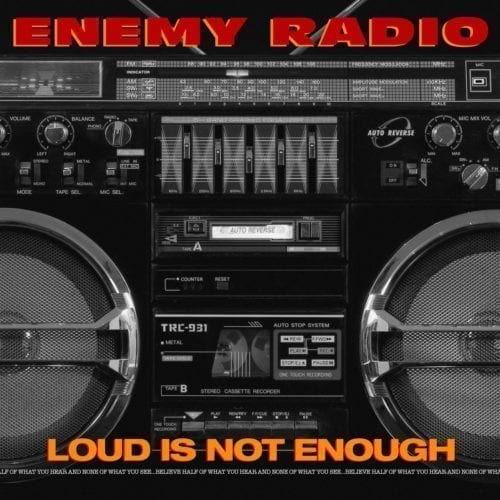 There’s not much difference between Public Enemy – the legendary hip-hop band from Long Island, New York, formed in the 1980s – and Enemy Radio, a side project of Chuck D with DJ Lord and The S1W (Security of the First World). One of Public Enemy’s leaders, Flavor Flav, has been switched out for Oakland-based MC Jahi, that’s it. It should certainly be added that Enemy Radio, just like Public Enemy, is rooted in old-school hip hop. There is also a definite tilt toward reggae on the song “Food as a Machine Gun”, in which Flavor Flav participates. “Eat it up, eat it up / They eat it up, they don’t need it”, he exclaims over a mix of rap and reggae beats, supported by the deep voice of Chuck D. Flavor Flav’s relatively limited contribution consists of a few ad-libs that serve as hooks in the song.

There is nothing transcendent about this new album. It is similar to many works offered over the years by various rappers. Certainly, the catchy track “Food as a Machine Gun” should appeal to fans of the genre, but at least a third of the ten tracks on this production lack originality. This is the case with “STD” and “Same God”. The start is good, but it stumbles a bit during the performance. The other tracks are quite muscular and successful. One thinks of “Born Woke”, “Man Listen” and the jazzy “Lock Your Wheels”. As a filigree of this 30-minute work, the provocative and intelligent socio-political discourse that we expect from Chuck D and Public Enemy since decades now is still there. We must also mention the numerous scratches (DJ Lord and C-Doc), the heavy beats and the lyrics delivered with a fair amount of aplomb by the rappers.

The April Fools publicity stunt ginning up the conflict between Chuck D and Flavor Flav (the latter allegedly abandoned the band) piqued the curiosity of journalists and the public about the album, which is very good for a band (Public Enemy) often neglected by the media, despite its huge success over the last 35 years or so.