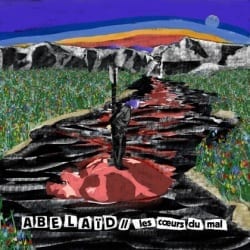 After clicking on the white triangle, we hear a deep, gravelly voice chanting, “J’ai vu la colère – J’ai vu l’avanie – Les deux ravagèrent – Ce qu’on avait d’acquis” (I saw anger / I saw humiliation / The two of them ravaged / what we had gained”). One wonders whether this is a posthumous song by Philippe Léotard or Allain Leprest, or a new album by Hubert-Félix Thiéfaine. Mais non! This voice and these words emanate from Abelaïd Khydali, an anagram behind which hides – barely – Adib Alkhalidey, whom we know as a humourist, actor, and director (Mon ami Walid).

Adib reveals his unsuspected affinity with poetry and music in a masterful and unequivocal manner. What a limpid and inspired pen, sometimes melancholy, sometimes soothing! Adib Alkhalidey, alias Abelaïd (from Abel, the first victim of a fratricide according to Genesis, and aïd, which means “feast” in Arabic), opts for a spicy language, capable of resonating in the ears of all francophones and francophiles. We’re grateful to him for this. Pierre Lapointe too, who will no doubt feel less lonely.

To penetrate the ether of our ambivalent consciousness, these lyrics are laid out on a rhythmic and melodic support of a synthetic nature, except for rare acoustic contributions, as in “Orphelines”. The atmosphere is sometimes conducive to dance, as in the title song. Mathieu Magny produced Les cœurs du mal, an allusion to the iconic collection by the man who dyed his hair green 125 years before Johnny Rotten, Charles Baudelaire.

After the sudden conclusion of “L’Enfer c’est l’Autre (seulement si tu le crois)”, the last track of the album, nothing can stop us from affirming that Les cœurs du mal is one of the most edifying works of the moment, in French-speaking song.