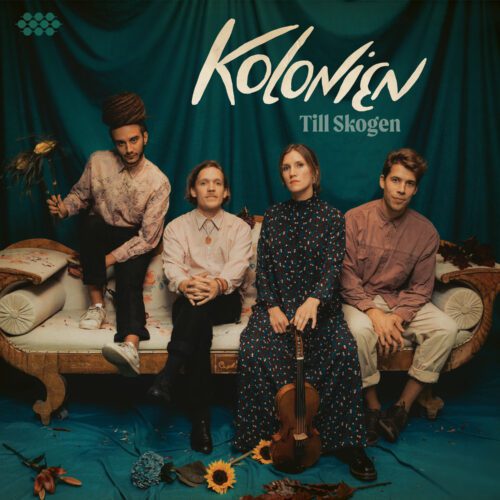 I recently told you about the Swedish folk-pop quartet Kolonien because I had the chance to see them live on a very small, and frankly adorable, street corner stage (in this case Duluth East) in Montreal. It was last Sunday. We heard most of the songs from their most recent album on the Cumbancha label, Till Skogen (which means To the forest, as in a tribute to…). The album was released last April, way under (as in very under) the usual media radar. At least those on our side of the big lake. They are usually too busy talking about the same 10 or 15 “A” category artists (i.e., already well known). That’s where Pan M 360 takes over! Well, OK, a little late this time, I admit. In the case of the “others”, the excuse is lame (they’re not interested), in our case it’s more understandable (we’re interested, but) : we’re few and we don’t have enough time to cover the thousands (literally) of monthly (if not weekly!) releases in the music world. In short, we missed it. Mea culpa.

So here’s why I’m coming back to it now, because after their exciting (and quite impromptu, read the details in my comment) performance last Sunday, I had to tell you about it.

Till Skogen is Kolonien’s fourth opus and the band’s direct, immediately accessible style will make you want to go and listen to the previous ones, which are of the same ilk. We’re talking about melodic lines that fly over and stick closely to the catchy pop-folk rhythms (notwithstanding a few ballads). In counterpoint, Ana Möller’s violin, with its obviously well-studied technical quality, but with a wiggle well wrapped in local folklore. This one will, it must be said, have Celtic resonance to ears that are new to this kind of repertoire. This is perhaps due to the fact that it is not strictly folklore, but rather good pop inspired by traditional music in a context of open modernity, hence certain possible aesthetic crossings. Not to mention, of course, the initial and quite logical similarities, as the two cultures have been living side by side for thousands of years.

Here is music focused on a proud Nordic culture but certainly permeable to influences from elsewhere, eager to meet the rest of the world and not to lock itself in a soothing nostalgia that can turn into self-satisfaction or, worse, identity withdrawal.

Ah, and that fabulous Swedish language that rolls and bounces on the tongue and lips like a mischievous superball! Irresistible.

In Montreal (and a little earlier in Ottawa and Sherbrooke), there were four of them. Of course, in these times, it’s better to travel light. But on the album, the bill is fleshed out with Hammond, accordion, trumpet, clarinet, saxophone, and a choir!

Do yourself a favour: stick the smiling tunes of these ultra-gentle Vikings on your ears.