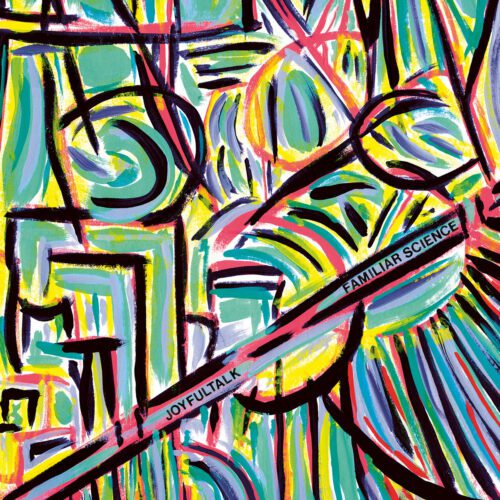 JOYFULTALK’s new album Familiar Science is a lot: a lot of instruments, a lot of notes stacked precariously atop and around each other, and a lot of different moods being expressed sometimes simultaneously.

The album begins with reverb-drenched, repetitive vocal lines that bring to mind most of the intros to the LPs of RX Bandits, Orange County’s favourite math ska troupe. “Body Stone,” the first track, continues with the addition of a digital harmonizer-infused guitar line and heavily compressed drums. Once a violin joins the arrangement, the song sounds like a space journey that’s somehow both disastrous and groovy.

The second cut, “Take It To The Grave” goes in a different direction, the monophonic bass line instantly reminding me of mid-nineties industrial groups like The Prodigy or QOTSA’s early instrumental tracks. A playful guitar comes and goes, contrasting the driving rhythm below. The song ends with a beat that sounds like a steam engine coming to a quick, rickety stop.

From there, Crocker moves into what resembles jazz fusion territory, featuring a saxophone reminiscent of John Zorn’s crazy, frantic solos. The rhythm sounds like something Steve Reich would have made if he had slightly better computers back in the 70s.

As the song, “Particle Riot,” progresses, the horn gets tinnier and tinnier and modulated until a 5/4 sub-bass beat changes the feel only slightly. The name “Particle Riot” is apt since this sounds like what I imagine the Large Hadron Collider itself would compose if it could. The song also gives off strong Deerhoof vibes, coincidentally the only band to have actually played a show at the LHC.

If you’re familiar with the weird, modulated poppy sounds of Tera Melos, the sound of the fifth and title track from this album will be immediately identifiable. The digital harmonizer returns over poppy euphonic chants – this could be the score to a chase scene in a dimly lit mystery film. Hand drums and a guiro then back a saxophone solo, much smoother than those from earlier in the album. Shortly thereafter, the guitar comes back with a pair of stereo-panned shakers to resolve the tune.

The following cut, “Ballad in 9,” starts with perhaps the strangest sound I’ve ever heard. My only guess as to what is making this sound is maybe a Peter Frampton-style talkbox on a guitar. As the title suggests, the song is in 9/4 time, and focuses again on a compressed, trashy cymbal beat and sustained, chanted vocals. A saxophone joins the mix and glides around on top of the beat like Elvis Stojko on a gold medal day. By only halfway through, the song is so smooth, that you’ll forget it’s in an odd meter.

Maybe my favourite portion of this LP, “Hagiography” sounds to me like a drunk Magpie telling a long-winded story that never quite reaches its point. The sax lead gets more and more chaotic until it takes over the whole song and is joined by a classic KORG-like synth and trails off down a long hallway.

So if you like jazz fusion, experimental instrumental stuff, or even some of the poppier math-rock out there, this album is likely for you. Don’t walk into it expecting an easy listen. Strap in and prepare to be bombarded with weird rhythms, scattered melodies, and cacophonic tones.