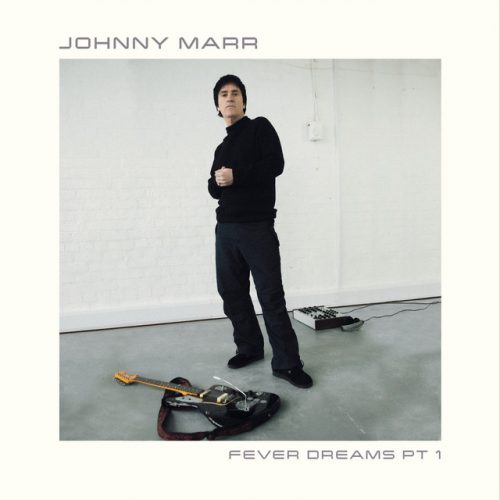 Johnny Marr, the man responsible for the guitar hooks—and let’s face it—the overall appealing sound of The Smiths, has been killing it after the 1980s British jangle pop band. He had a stint with The Pretenders, has worked with Talking Heads, Electronic, Hans Zimmer, Modest Mouse, and most recently, one of the biggest and youngest pop stars today—Billie Eilish—on the new James Bond title-crawler “No Time To Die.”

Marr also has four solo LPs, not all of them hits, but his latest EP, Fever Dreams Pt. 1, a four-song teaser of his upcoming 2022 double album Fever Dreams Pt. 1-4, is one of the more memorable. Marr has always been a stand-up guy when asked questions about The Smiths, a band who haven’t been around for almost 35 years, so it’s no wonder his own music is always compared to them. And usually, the review is “it’s good, but it’s not The Smiths.”

But with Fever Dreams Pt. 1, Marr might finally be over the comparison. The opening number “Spirit Power and Soul” is almost new-age disco, featuring layer synths, electronic drums, and a few minimal guitar lines. The production on this track is insane. At one moment, it’s like you’re in a grimy German disco looking for the next drink, the next you’re front and centre in neon-lit cult circle with Marr as the robed leader. It’s a ridiculously catchy track.

“Receiver” sounds like the opening to a David Fincher movie, utilizing the evil sounds of synthwave. A few seconds later the track brightens up with a phased, almost underwater, guitar tone. One might picture Marr on his back on the studio floor, closing his eyes, and manifesting the perfect guitar tone for this track. The song is about all of the information we has humans consume and “decode” on a daily basis. Also, Marr is not only a brilliant songwriter, but singer. His voice pairs perfectly with the nostalgic feel the song is going for.

The two EP closers, “All These Days” and “Ariel”, are probably the most Smiths-sounding tracks, with the jangly guitar hooks and fuzzy bass. On the surface value, yes they sound like riffs that could be on The Queen Is Dead, but the mixing and mastery of Marr’s studio work sets them apart. The acoustic arpeggio in “Ariel” is also reminiscent “The Killing Moon” by one of Marr’s counterparts, Echo & the Bunnymen.

There will most likely be some duds on the full LP, but if the sounds on Fever Dreams Pt. 1 are a prevue of what we can expect, the full LP should convey some of Johnny Marr’s best solo work.