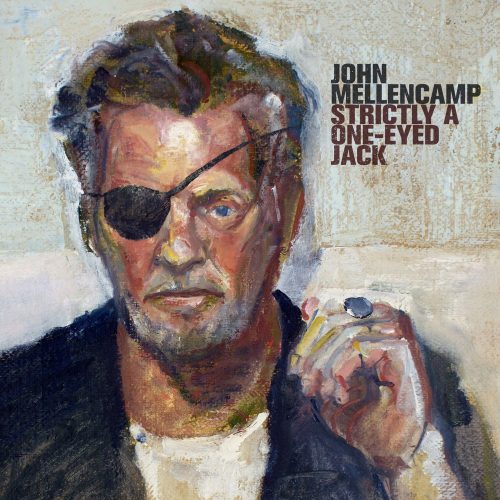 “I always lie to strangers – I am a man of low dеgree – This world is run by men – Much more crooked than mе”: bleak words sung by John Mellencamp in “I Always Lie to Strangers,” the opening track of Strictly a One-Eyed Jack. Towards the end of the album, the song “Lie to Me” puts lies in the spotlight again: “I never took much trouble – With the truth myself – So lie to me – Lord knows I’m used to it”… Such is the extent of the disillusionment Mellencamp feels, when this venerable singer from the USA’s heartland sees the gangrene eating away at the heart of his country. Now in his seventies, Mellencamp has never seen reality so clearly, even if his son Speck represented him with an eye-patch (like John Wayne in True Grit) on the portrait that illustrates this 24th studio album. This is a direct reference to the title of the album and the song “Simply a One-Eyed-Jack,” where John invites us to be wary of the jack seen in profile, this coveted but deceptive card (“We’d better make a move or become the victim of – That lying one-eyed Jack “). Strictly a One-Eyed Jack is therefore a journey into the heart of lies… and Americana music at its most moving. Mellencamp’s larynx holds up, though you can hear it’s been roughened up by the three packs a day its owner once smoked. Led by Andy York, the elite roots-rock troupe that accompanies the “Little Bastard from Indiana” plays more tightly than ever. All in nuances like on the smoky ballad “Gone So Soon.” Or in power as on Lie to Me and its rural riffs. And as a bonus, Mellencamp is backed by his brother-in-arms Springsteen on three tracks, including the instant anthem “Wasted Days.”