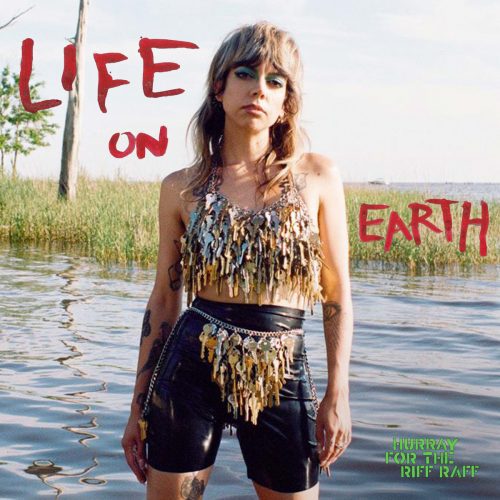 In “Deportee (Plane Wreck at Los Gatos),” Woody Guthrie sang “Both sides of the river – We died just the same.” In “Across the Border,” Bruce Springsteen sang “And we’ll drink from the Bravo’s muddy waters.” Today, in “Precious Cargo,” Alynda Segarra sings “And I don’t know why he hate on me – The man from the I.C.E.” Ms. Segarra has been a singer-songwriter with Hurray for the Riff Raff, a band based in New Orleans, for the past 15 years. I.C.E. stands for Immigration and Customs Enforcement. This is one of the obstacles evoked in the eleven songs of Life on Earth, an album – the seventh of this precious band – about survival, a theme that unfortunately never gets old.

If Hurray for the Riff Raff has been making moving music since its inception, it’s primarily because of Alynda Segarra’s vocals. But what a voice she has! Yes, one thinks of PJ Harvey. But also to Catherine Ringer. And Pauline Julien. For the poignant inflections, for the strength, for the soul, for the commitment, for the absolute absence of show-off. In Life on Earth, Hurray for the Riff Raff covers large swaths of Americana and pop subgenres: anthemic, synthetic folk in “Wolves,” post-punk and country-rock hybridization in “Pierced Arrows,” punkish jangle-pop in “Rhododendron” – co-composed by Segarra and My Morning Jacket frontman Jim James -, electro-soul in “Jupiter’s Dance,” melancholic folk with neo-Orleans brass in the title track, ambient-jazz in “Nightqueen” (featuring the voice of Vietnamese-American poet Ocean Vuong), electro-folk hip-hop in “Precious Cargo,” neo-gospel in “Rosemary Tears,” cutting-edge indie rock in “Saga.” The album ends with “KiN,” a noisy piece where bells ring and the engine of a boat hums away, while the birds sing. So goes Life on Earth.