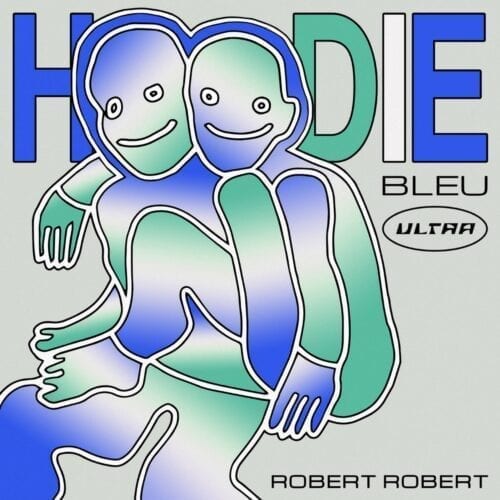 Here we have Robert Robert (on stage – off it, he’s Arthur Gaumont-Marchand), a creator as hyperactive as he is precocious. This energetic producer, DJ, and singer-songwriter has been making singles and EPs for the past few years, first at Secret Songs, Nova Scotian producer Ryan Hemsworth’s label that isn’t really a label (it’s more of a download platform for tracks sorted by Hemsworth), then at Silverstag and, since 2017, at Nowadays Records, an increasingly prestigious French label. Robert Robert has performed on a variety of stages – MEG, Piknic Électronik and Igloofest in Quebec, Garorock, Printemps de Bourges, MaMA and Nova Mix Club in France  – notably as curtain-raiser for keb darlings Les Louanges.

The eight tracks on Hoodie Bleu Ultra total 26 minutes and 50 seconds, and are linked by a thread, the one on the blue hoodie of the title. As a prologue, a narrator tells us, in the official vernacular of Generation Z, that he meets a young woman, from Facebook to Instagram and from chatting to “IRL”, as they say these days. But even though the evening is very pleasant and promising, given the “fuckin’ nice conversations”, the narrator notes that his one-night caller is clearly “not down”, since she doesn’t respond to his subsequent messages.

To make matters worse, she has taken away his blue hoodie. A search ensues, the frenzy of which grows more and more frenetic as the album progresses, as evidenced by the increasingly pressing rhythms and the titles of the last four pieces: “Reste avec moi”, “Comment faire”, “Presque” and “Still in my mind” (with its hallucinatory accordion). Special mention goes to “Speak”, a seductive song to which LIA, a Montrealer from Maryland, lends her voice.