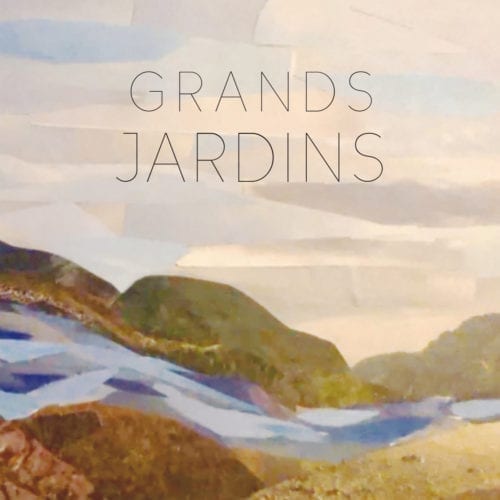 Bringing water back from Mars, then extracting the salt to sell it to millionaire gourmands, does that sound crazy to you? Ever since the Curiosity probe discovered blue gold on the red planet, someone’s probably been pondering the possibility… On this first track on their album of the same name, the duo Grands Jardins looks at the quest for profit and its excesses. The general tone and caustic commentary are similar to those of singers like David Marin or Olivier Bélisle.

Let’s go back to the Parc national des Grands-Jardins, in Charlevoix, a few tens of millions of kilometres from Mars. An inspiring place, as Chantal Bergeron and Alexandre Dufresne prove beyond doubt with this collection of folk songs enriched with tasteful arrangements. One can feel Bergeron’s classical baggage behind them. The cover illustration, created by Alexandre Dufresne, could be a neo-landscape tribute to the Charlevoix painter René Richard.

In the low notes, Bergeron’s voice reminds us of the late Ève Cournoyer, while in the high notes, she reminds us that beauty is vital. She’s also a violinist, pianist, and mandolin player, one who’s accompanied Céline Dion, Klô Pelgag, Ginette Reno, and Catherine Major. Dufresne is a luthier and multi-instrumentalist. The duo wrote and composed everything – except the lyrics to “Songbirds”, crafted by Aloysius Bell – and co-produced Grands Jardins with Rémi Giguère. Elite musicians supported the duo on a fifth of the pieces.

Listening to Grands Jardins, we float on a carpet of lichens while our singing nature guides present “La faune”, “L’ouverture de la chasse”, “Le renard” and “La flore”. On “La grotte du Last Call”, we join Sara Dufour and Alex Burger on the trails once laid out by Richard Desjardins. This album reminds us that song is a natural resource here.